Books of their youth 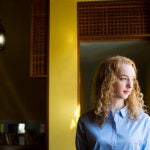 Wrapping her mind around the past

Education is a lifelong process. Therefore, it makes sense that our appreciation — and understanding — of the books in our lives changes and grows over time. The Gazette asked a handful of Harvard faculty to talk about a book from their student days that has since gained in resonance or meaning.

“My grandparents left China for the U.S. during WWII. Their three children, including my father, were born here. My grandparents spoke mostly English to my father and his two sisters. As a result, I grew up knowing very little Chinese. And so, to the delight of my grandparents, I enrolled in an introductory Mandarin course my freshman year of college. As a supplement to a textbook I have since lost, I was told to buy the Concise English-Chinese Chinese-English Dictionary, by A.P. Cowie and A. Evison (1986 edition). It was about the length and width of a smart phone, but heavier and much thicker. It felt good in my hand. The imperial red cover was a waxy canvas material and the pages — all 1,100 of them — were thin like that paper people used to use for international mail. The print was ridiculously small.

‘I would have rather lost my passport than my little red dictionary.’
— Cheryl Chen

“During a semester in China my junior year, I carried this dictionary with me everywhere I went. It’s been to a remote Tibetan Buddhist monastery in western China. It spent the night in a yurt in Inner Mongolia. It saw the famous Karst formations near Guilin. It travelled by boat through the Three Gorges on the Yangtze River. It sat with me on the big toe of a giant Buddha statue in Sichuan Provence. It spent hours and hours on slow crowded trains. I would have rather lost my passport than my little red dictionary.

“Now the dictionary sits unopened on my shelf. The cover is faded and frayed. There are black ink stains on the corner. My grandmother turned 97 a few weeks ago. When I visit, I usually bring her some soup. After she’s done eating, I shout in her ear one of the few phrases I remember — ‘Ni chi bao le ma?’ (Are you full?) — and this makes her smile.”

“Stewart Udall’s ‘1976: Agenda for Tomorrow’ grabbed and shook me when I first read it as an undergraduate. It has served me since as it did then, a reminder in times when I am inclined to despair over humankind’s seemingly unending abuse of people and environment that there is another option. One can just pull up one’s socks and get on with the work of trying to make things a little better.

“I met Udall’s book as a sophomore at Yale in the year of its publication: my generation’s annus horribilis of 1968. Our cities were burning, our leaders were being murdered, our population was exploding, and our traumatized universities could think of little to do but close their doors.

“Udall reached beyond … to sketch a broader and longer-term vision of a truly humane world worth striving for. More unusually and, at least for me, importantly, he set forth a pragmatic agenda for achieving that vision. This called (among other things) for individual citizens to do their best at coupling scientific knowledge with political agitation in a synoptic approach to the interconnected challenges and opportunities confronting us. When Udall showed up at Yale the next year as a visiting professor at the School of Forestry, I used my familiarity with the book to wrangle my way into his graduate seminar. His combination of idealism, pragmatism, and simple humanity made this remarkable public servant — and his ‘Agenda for Tomorrow’ — the closest thing I know to the lodestar for my subsequent career.”

‘I have slowly realized that everything in biology, and in life, is interconnected.’
— Brian D. Farrell

“When I first read Mayr and Williams, and Stephen Jay Gould, I could not quite picture how macroevolution and microevolutionary change were relatable, beyond the mere statements that one leads to the other. … I have slowly realized that everything in biology, and in life, is interconnected, and therefore have developed the perspective that no one is fully trained if they cannot specify the contributions of every other discipline to the understanding of their own subject of study. Disciplinary chauvinisms, like other forms of bias, reveal ignorance more than knowledge. I think my appreciation of the beauty of this interconnection of arts and sciences has deepened as well as broadened since I was an undergraduate, and I think our collective understanding has grown in sophistication as well, as the boundaries blur between the disciplines, enabled by new ideas and new technical approaches.”

“John A. Williams’ novel ‘The Man Who Cried I Am’ was very important to me when I was at Dartmouth. I loved how Williams presented black characters in a naturalistic way. They sounded like people I knew. They had aspirations that were familiar, which is not always the case with depictions of African-Americans, which are, too often, one- or two-dimensional. It was also a very deft roman á clef. Richard Wright appears, as does James Baldwin — a not very flattering portrayal of my idol, actually. Williams writes with a kind of freedom in this book that was startling to me, very exciting. I looked at it a few years back, and noticed a few problematic gender issues that I missed. I think were I to read it in total again, I might have a slightly different view of it. But it was perfect for me at the time.”

“Albert Camus’ ‘The Myth of Sisyphus’: I first came across that book in the year between high school and college. I pulled it from the library shelf thinking it was going to be a book on mythology and discovered, of course, that it is a philosophical treatise, which I immediately felt a strong affinity to. Of course I didn’t understand most of it when I first read it. I took it with me to college and basically read it over and over again right through college until I felt I understood it, through the process of absorption. It greatly influenced me.

“My very first book was a novel, called ‘The Children of Sisyphus,’ and it was about the poverty and utter despair of the people who live in the shantytowns of Kingston. I had decided that what I was learning, what I was experiencing, was best expressed in terms of a novel. All through that time, what strikes you most living in or visiting this extreme poverty is the whole question of what makes life meaningful for these people, which in a way is the central question that motivated Camus. The shades of not just despair but the kinds of existential angst that he is going through. What makes life meaningful? How can one survive? People living on the dung heap, who live off the trash and the refuse of the rest of the city, where do they find meaning?

“That theme of meaning and meaningless resonated with me, and it carried through to higher levels as I moved from Jamaica to Britain and also to other works by Camus. In many ways, his ideas remained with me not in the sense that I return to him any more, but in the sense that he formed the initial foundation of my thinking. I think I moved on, but he was the right philosopher and the right novelist for me at the time.”