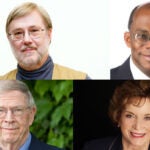 Growing up in the South, Tommy Tobin was part of a family that loved food.

“We liked to eat a lot,” said Tobin, who graduates this month with degrees from Harvard Law School (HLS) and Harvard Kennedy School (HKS) and a plan to build his career around food law and policy.

When a severe speech impediment left him struggling to be understood, food became a way for Tobin to connect with others. In high school, he volunteered at a food bank and with the Boys & Girls Clubs of America, and watched his actions speak volumes.

“I didn’t need to speak, I could just do,” said Tobin. “And speaking through service became a theme for me.”

That commitment to service continued in college. At Stanford University he led the Stanford Project on Hunger to help reduce food waste in the dining halls and to support a nearby homeless shelter. After graduating in 2010, he served as an intern with the White House’s Domestic Policy Council, working on reducing food waste around the country.

Tobin spent a year in Ireland doing graduate work in food business. Back in the United States, he applied to the Master in Public Policy program at HKS.

“Harvard’s a wonderful place to go to study food,” Tobin said. “People all over this University work on food issues.” Not least at the Law School, which has a clinic devoted to food law and policy. Before long, Tobin was cross-registered in HLS classes. Then he was applying. Then he was accepted.

“To actually get in was incredible,” he said.

Tobin’s passion for food justice is matched by his fascination with language, which developed in part when his speech issues forced him to scour the thesaurus for word substitutes. “I became really interested in the phrasing of things,” he said.

Tobin’s Harvard goal was twofold: develop his knowledge about food law and policy through classes and research, and translate that research to a wider audience. But his Harvard experience didn’t stop with writing and research. He was also a non-resident tutor at Cabot House and a teaching fellow for the Harvard College course “Principles of Economics.”

Some might think balancing a dual course load with editing and writing would rank as Tobin’s top Crimson memory. Instead, working with undergrads was “the highlight of my time at Harvard,” he said.

“Contributing to their undergraduate experience has been a wonderful privilege and a responsibility. I get to teach them this new language and these new tools … I want to get these undergraduates in the mode of thinking that they too can contribute to these ongoing issues of public concern.”

In a sense, Tobin’s life has come full circle. “Food is love” was his mother’s mantra when he was growing up, and helped to guide him through Harvard — and prepare him for his next step. Soon he will start a clerkship with a federal judge in North Carolina. Eventually, he’ll look to move to a law firm to focus on food law and policy.

“I hate to hear about people who have to choose between feeding themselves or feeding their families and the medicine that they need,” said Tobin. “Those are impossible choices to make, but I hope that in a small way my efforts can help.”