A focus on veterans 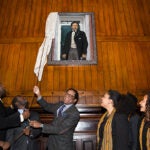 For Elizabeth Biney-Amissah, an M.P.A. candidate from Harvard Kennedy School (HKS), volunteering to serve local veterans was a no-brainer.

“I heard ‘veterans,’” said Biney-Amissah before she hopped on a bus with 14 Harvard students to travel to a homeless shelter in Quincy on Friday. “I heard ‘giving back,’ I heard ‘impact,’ and I wanted to be part of it.”

At the shelter, which serves homeless vets and others in need, students prepared and served a meal, helped clean a storage shed, and did minor landscaping as part of Veterans Impact Day, a service initiative hosted by the HKS Center for Public Leadership and organized in part by student veterans.

More than 150 students from Harvard and other Boston-area colleges participated in the event, which stretched across six locations. Some helped veterans with resume-building and job searches, both at the JFK Veterans Administration Center in downtown Boston and at a Pine Street Inn facility in Chelsea. Others went to the Navy Yard in Charlestown to spend the day with active-duty sailors and take part in cannon fire drills and rowing races.

One group cleaned wheelchairs, helped with landscape maintenance, and greeted patients in the lobby of a hospital for veterans in West Roxbury. Another met with Navy personnel to come up with ideas to bridge divides between civilians and the military. For lunch some students had MREs, meals ready to eat, used by the military in combat zones.

Civilians and the military can learn from each other, said Professor David Gergen, co-director of the Center for Public Leadership.

“Your coming together today is very symbolic of what happens and can happen to your generation,” said Gergen, speaking to an audience of students and men and women in uniform at HKS. “It represents the future. You’re spending the day together, learning from each other about leadership techniques on each side. It’s a marvelous opportunity.”

Before students went on to do their service, they received words of advice and wisdom from a panel of veterans whose careers are example of resilience and bravery. The group talked about their war experiences and the important role the community plays in helping veterans transition from military to civilian life.

“When a soldier comes back from the battlefield and tries to reintegrate into society, there is no playbook for that,” said Army Maj. Dennis “DJ” Skelton, who fought in Iraq and Afghanistan.

He added, “We have to rely on the community to help us get through that challenging period.”

The panelists agreed on the value of resilience and it how it can be achieved by learning from defeat and by taking life one moment at a time.

“If you’re going to run the marathon and you only think about the end, which is 26 miles away, that’d crush you,” said Dan Cnossen, HKS ’16, a former Navy SEAL who lost his legs during his service in Afghanistan and is now a Paralympian. “Take it a mile at a time.”

Skelton, Cnossen, and the other two panelists, Josh Mantz, an Army vet of the Iraq War, and Kristen Kavanaugh, a former Marine, commended the students for their participation in the day of service.

HKS student Vaiba Flomo, a peace activist in her home country of Liberia, said her involvement was an act of gratitude.