The ace of bass 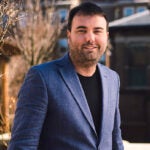 Education is a crucial to Rufus Reid. The composer, bassist, and longtime teacher, who is the 2016 Harvard University Jazz Master in Residence, sponsored by the Office for the Arts at Harvard (OFA) and Harvard Jazz Bands, knows it from personal experience.

“Most people don’t like things they don’t know,” says Reid, a two-time Grammy nominee. Reid himself — who studied with bassists from the Chicago Symphony — used to say he didn’t like classical music. “I was ignorant about it,” he says now. “I didn’t understand it.”

Reid, who helped create the Jazz Studies and Performance Program at William Paterson University, sees that same challenge with jazz. “A lot of people say they don’t like jazz, but they’ve never really heard it. Once they learn a little bit, they say, ‘Wow, that’s great.’”

Now retired from full-time teaching, the 72-year-old musician is spending a week at Harvard, leading the Harvard Jazz Bands and the Wind Ensemble in master classes. In addition, the public is invited to participate in two events with Reid: a conversation with Ingrid Monson, Quincy Jones Professor of African-American Music, on Wednesday at 4 p.m. in Holden Chapel, and a tribute concert on Saturday at 8 p.m., during which he will join the Harvard Jazz Bands (Yosvany Terry and Mark Olson, conductors) in “The Eloquent One: Celebrating Rufus Reid” at Sanders Theatre. The concert will feature several of Reid’s compositions, including the title number and two pieces from “Quiet Pride: The Elizabeth Catlett Project,” an homage to the African-American sculptor.

“Ultimately, we as composers are trying to find ways to surprise the listener,” says Reid, who garnered his two 2015 Grammy nominations for “Quiet Pride.” “To surprise them — and still keep them.”

Reid’s life has been a journey of discovery. Although he began playing trumpet in junior high school in Sacramento, Calif., Reid found himself drawn to the bass early on. As a member of his school band, Reid recalls, “Every time we took a break, people would go out and play ball or whatever, and I would want to go touch the bass.” While the trumpet earned him a berth in the U.S. Air Force band, he used his free time to pick up the stringed instrument.

“It came to me: I could do less of it initially than the trumpet, but I would have more satisfaction and more desire,” he says. “When I got out of the military, I sold my trumpet and bought a bass.” He also began studying it seriously, earning a bachelor of music degree as a performance major on the double bass from Northwestern.

The bass, he explains, “is the core or the foundation of any ensemble, whether it be a symphony orchestra or a Latin group. It grounds the ensemble. I tell my students, we have the unique ability to sabotage any band we play in. It’s a lot of power but also a great responsibility.”

Since then, Reid has played bass with a panoply of jazz greats, including Dexter Gordon, Lee Konitz, Art Farmer, and Stan Getz.  He credits his first boss, bandleader Eddie Harris, with teaching him how to be a professional musician, understanding the importance of everything from recording to contracts.

“Being a professional is a marriage of things you have to be quite aware of in order to be successful,” he says.  From Harris, he says, he learned more than “to play good.” Among other lessons, Reid credits Harris with spurring him to write his 1974 book “The Evolving Bassist,” which is now an industry standard and in 2003 was complemented by a DVD.

As a teacher himself, says Reid, he hopes to impart a sense of the “collaboration and compromise” necessary to ensemble playing. “Working together, listening to one another, creates something better than any one person can come up with by themselves,” he says. “And that in itself is what I really feel jazz is, in terms of what we do when it’s done the best — it’s happening at the moment.”

Beyond that, he hopes to convey a sense of “sustained passion.”

“I have as much passion, if not more, than I did when I was their age,” he says of his students. Many undergraduates at Harvard, he understands, may focus on other disciplines, such as math or the sciences. What matters is the commitment. “I want them to continue that passion,” he says, “whatever it happens to be.”