In the first visit of a sitting Italian prime minister to Harvard, Matteo Renzi — who became Italy’s leader in February 2014 — addressed recent acts of terrorism in Europe, declaring, “The attack on Brussels was an attack on Europe — Europe as an idea, the most incredible political project in the last century.”

Renzi’s appearance at Harvard on Thursday was part of a four-day trip by the prime minister to the United States and was sponsored by the Minda de Gunzburg Center for European Studies. In introducing Renzi, Peter A. Hall, the Krupp Foundation Professor of European Studies, remarked that the visit was a special occasion for the University, “because it is an opportunity to hear from one of the most exciting leaders on the European continent.”

Renzi, who drew a capacity crowd to Menschel Hall at the Harvard Art Museums, warned that ending the threat of terrorism requires a political response as well as force and enhanced security.

“The terrorists who killed people in Brussels … they didn’t come from Syria or from Libya or Tunisia or Afghanistan,” he said, speaking forcefully. “They grew up in Europe. This is the point. If European politics doesn’t understand the great problem of this element, this means we are without a future. We must see the reality. The people who destroyed our lives in Paris and Brussels grew up in swamps in the belly of our cities.”

He called the European emphasis on austerity over the past five years “a mistake,” saying leaders need to create jobs and give citizens opportunities and hope. He insisted that Italy should allow those who win elections to have real power to institute reforms. Without political stability, he said, populist movements will continue to grow. 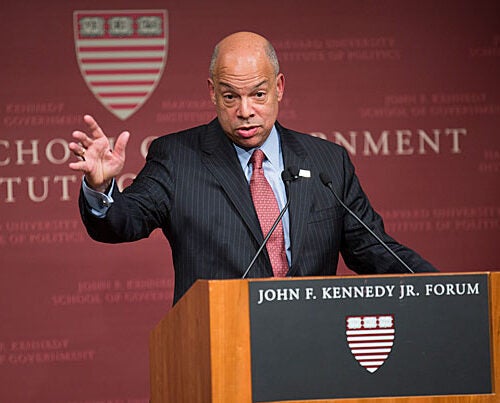 Muslim communities must be invited to become part of the solution, Homeland Security chief says

“The position of the Italian government is that for every euro invested in security, we need a euro to invest in education,” he said. “For every euro invested in cyber technology, we must invest one euro in theater, in sports, in museums.” He acknowledged that this is not a majority position among his European colleagues, but “without this approach we are not in a condition to fight against the enemy. The enemy is not [outside] of us. The enemy is inside our cities, inside our borders.”

Renzi struck a personal note when he spoke of his grandfather, a warrior who fought against French and Greek forces, and his father, who lived in a more peaceful era. Both had optimism about the future. By contrast, he said, “My generation is surrounded by fear.”

Renzi, a former mayor of Florence, whose ascent made him the youngest prime minister since 1861, has been credited with implementing numerous electoral, political, and economic reforms.

Turning to U.S. politics, Renzi noted that Italians “follow your election campaign with great attention” adding that he “would be more happy” if a woman were elected president, but that he would “respect the results” in any case.

Before his talk, Renzi toured the Calderwood Courtyard, modeled on a 15th-century Italian church, at the Harvard Art Museums, whose recent renovation and expansion was directed by the renowned Italian architect Renzo Piano.

CES welcomed Prime Minister of Italy H.E. Matteo Renzi in the first visit of an incumbent Italian prime minister to Harvard University. Renzi emphasized the need for investment in education and economic opportunities for young people in Europe.