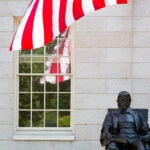 Although its eye-catching prototype on display at the President’s Challenge Demo Day at the Harvard Innovation Lab (i-lab) attracted a lot of interest Monday night, the team representing SurgiBox — a collapsible, safe, and aseptic surgery device — didn’t think it had much of a chance at this year’s $70,000 award.

So when President Drew Faust announced that it had won the grand prize, the excitement and surprise was so intense that it had yet to subside 15 minutes after the company’s name had been read to the crowd gathered at the i-lab.

“I’m in total shock,” said Christopher Murray, a student at Harvard Medical School (HMS) and a member of the SurgiBox team. “As a medical student, I could tell that my sympathetic nervous system, which is the fight-or-flight response, was stimulated. I started sweating and my heart started racing.”

The idea for SurgiBox dates back three years, to when Debbie Lin Teodorescu developed the prototype of the company’s device as part of a research project at HMS. Teodorescu couldn’t be at the ceremony, since she is currently doing an away rotation in Taiwan as part of her studies.

“Over half of the world’s population has limited or no access to sterile surgery. We want bring safer surgery to those places with an affordable solution,” Murray explained.

Another SurgiBox team member, Madeline Hickman, an active learning design specialist in mechanical engineering at the Harvard John A. Paulson School of Engineering and Applied Sciences, explained that the device is an affordable and transportable alternative to the currently existing expensive, often unwieldy solutions for safe, sterile surgeries.

“This has a lot of potential applications for surgeons,” said Hickman. “It can be used during disaster relief, in developing countries that lack electricity, for humanitarian aid, or for military emergencies where it’s not feasible to bring surgery facilities to the front line.”

The SurgiBox team said they will use the $70,000 prize money to scale up their focus on finalizing their prototype, getting FDA approval, and testing the device.

Three other teams received runner-up prizes of $10,000 apiece to help them further their early stage ventures: Aegis, an app to track security in high-crime, low-transparency cities and empower citizens and businesses to make everyday decisions; Astraeus Technologies, which has developed the L-CARD, a low-cost lung cancer screening test leveraging radio frequency identification (RFID) tags and smartphones; and Girls Health Champions, an initiative that trains adolescent girls throughout the world to become peer health educators and leaders.

More than 140 ventures applied to this year’s President’s Challenge, the fifth installment of the competition aimed at leveraging cross-School collaboration to create innovative and impactful solutions to global issues. In March, that pool, which included representatives of each of Harvard’s Schools, was narrowed down to 10 finalist teams, each of which received support from the i-lab and $5,000 in seed money. Prior to the announcement of the winners, all 10 teams showcased their products and ideas as part of the President’s Challenge Demo Day.

“We believe that participating in this challenge is a profound experiential learning opportunity for so many students to find each other around a shared passion and while trying to solve these major problems facing the world,” said Jodi Goldstein, the Bruce and Bridgitt Evans Managing Director of the Harvard Innovation Labs.

Before announcing the winning projects, Faust said, “This event has really become the highlight of my spring semester, and not just because I get to announce the winners.”

“It is a testament to what we hope and believe that Harvard can be, which is a place where ideas are tested and stretched and nurtured, where disciplines are transcended in pursuit of common goals, where people from different schools come together to build teams that can solve problems that can’t be solved by one field or discipline or profession alone, and where people bring their strengths to act on issues that matter deeply to them and develop solutions and approaches to some of the biggest problems of our time,” she said.

“When people ask me about my aspirations for Allston,” Faust concluded, “I point to this place and its people as a type of proof of concept of what we can achieve together in the years to come.”