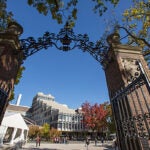 Yoshino and Haughey will be senior officers for 2016-17

Kenji Yoshino ’91, the Chief Justice Earl Warren Professor of Constitutional Law at New York University School of Law, has been elected president of Harvard’s Board of Overseers for the academic year 2016-17.

Nicole Parent Haughey ’93 has been elected vice chair of the Overseers executive committee for 2016-17.

Each a member of the Board of Overseers since 2011, Yoshino and Haughey will serve in its top leadership roles for the final year of their six-year-terms. They will succeed Karen Nelson Moore ’70, J.D. ’73, a judge on the U.S. Court of Appeals for the Sixth Circuit, and Diana Nelson ’84, chair of the board of Carlson, a leading global travel and hospitality company.

“Harvard’s Overseers are deeply devoted to the strength and well-being of the University, and they bring to their service an extraordinary combination of broad accomplishment and diverse experience,” said Harvard President Drew Faust. “Kenji Yoshino and Nicole Parent Haughey are both remarkably thoughtful leaders, and I am eager to work closely with them in their new roles on the Board.”

Kenji Yoshino took up his role as the Chief Justice Earl Warren Professor of Constitutional Law at NYU School of Law in 2008. His primary fields are constitutional law, antidiscrimination law, and law and literature. In 2014 he was recognized with the Podell Distinguished Teaching Award at NYU, where he also serves on the board of the Brennan Center for Justice. Earlier in his career, from 1998 to 2008, he taught at Yale Law School, where he rose to become the deputy dean of Intellectual Life and the inaugural Guido Calabresi Professor of Law.

Yoshino graduated from Harvard College in 1991. As a Rhodes Scholar, he received an M.Sc. in management studies from Oxford in 1993. He went on to earn his J.D. degree from Yale in 1996, then clerked for Judge Guido Calabresi of the U.S. Court of Appeals for the Second Circuit.

He is the author of three books: “Covering: The Hidden Assault on Our Civil Rights” (2006), which was recognized with the American Library Association’s Stonewall Honor for nonfiction; “A Thousand Times More Fair: What Shakespeare’s Plays Teach Us About Justice” (2011), and “Speak Now: Marriage Equality on Trial” (2015), which received the American Library Association’s Israel Fishman Non-Fiction Award.

Yoshino has published broadly in leading law journals, including the Harvard Law Review, Stanford Law Review, and Yale Law Journal, as well as in more popular publications such as The New York Times, The Washington Post, and Slate. He is also a frequent contributor to MSNBC and National Public Radio.

As a Harvard Overseer, he currently chairs the board’s standing committee on humanities and arts and serves on both the board’s executive committee and the University’s advisory committee on honorary degrees. He is also a member of the visiting committees for Harvard College, Harvard Law School, and the English Department, and he has recently served on the University-wide Task Force on the Prevention of Sexual Assault.

He and his husband, Ron Stoneham, live in New York with their two children.

As vice president for corporate strategy and development at United Technologies from 2013 to 2015, Haughey was responsible for strategy, mergers, acquisitions, and divestitures across the Fortune 50 company’s varied businesses. Previously, Haughey was a managing partner at Vertical Research Partners LLC, an independent equity research firm she co-founded in December 2009.

A 1993 graduate of Harvard College and an active volunteer in alumni affairs ever since, Haughey is a past president of the Harvard Club of New York and a former chair of the Harvard Alumni Association’s nominating committee.