No hearing for Garland, but plenty of noise 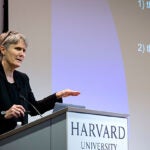 Building a discussion around the Memorial Church

High stakes on both sides in nomination standoff, analysts say

In an election season stained by political turmoil and anger, perhaps few should have been surprised that a monumental decision like who should sit on the Supreme Court would become yet another arena for partisan conflict.

Still, many legal and political analysts were astonished when Senate Majority Leader Mitch McConnell, who sets the Senate’s agenda, said the vacancy created by the death in February of Associate Justice Antonin Scalia, L.L.B. ’60, “should not be filled until we have a new president.” McConnell later declared that no meeting, hearing, or vote would take place for any nominee President Obama put forward, regardless of qualifications. He justified the move as both customary and prudent given the rancor around the presidential election.

Obama and fellow Democrats called the blanket refusal a breach of the Senate’s constitutional duty to advise and consent on court nominations and a political gambit designed to deny the president his prerogative to shape the court.

“I was pretty shocked that Saturday afternoon when the word got out that Justice Scalia had died. The sun had not set before Mitch McConnell said that no matter who the president sends up, they’re not going to confirm that person. That’s never happened before; never,” said Greenhouse, a 1968 Radcliffe College graduate, during a talk March 22 at the Shorenstein Center, six days after Obama nominated Merrick Garland ’74, J.D. ’77, to the court. Garland, a widely respected and moderate appellate court judge, enjoyed bipartisan support during his confirmation to the federal bench.

In an effort to galvanize voters, the White House launched a public relations blitz challenging the GOP’s pledge of non-action on the nomination. According to a recent CNN/ORC survey, two-thirds of Americans think the Senate should hold confirmation hearings and 80 percent of Democrats, along with 48 percent of Independents, think Garland should be confirmed.

Greenhouse disputed claims that the Garland nomination battle is comparable to Judge Robert Bork’s failed confirmation in 1987. At the time, Senate Democrats, who held the majority, voted down Bork after a full week of contentious hearings, not before, she pointed out.

Linda Greenhouse, longtime New York Times Supreme Court reporter, discussed the current polarization of the court, the nomination of Merrick Garland, and the legacy of the late Justice Antonin Scalia.

However unprecedented or unfair it may seem to some, Harvard analysts say the Obama administration has little recourse to get around a GOP roadblock.

“There’s nothing in the Constitution that says that these vacancies absolutely must be filled and must be filled in a timely manner,” said David King, a senior lecturer in public policy and faculty chair of the M.P.A. program at the Kennedy School. “It’s nothing new. Marbury v. Madison was all about appointments in time of political transition and that was in 1803, so the history here is really quite extensive.”

“The Constitution includes a right to say no and you can say no at any stage, whether before a hearing or after,” agreed Harvey C. Mansfield ’53, the William R. Kenan Jr. Professor of Government at the Faculty of Arts and Sciences (FAS).

He called the nomination of Garland, a moderate 63-year-old white male, politically “skillful.”

“Scalia’s death is a great windfall for the Democrats, a big advantage for them,” said Mansfield, a well-known conservative voice at Harvard. “They get a chance to show that they can be moderate and it’s the Republicans who are the obstructionists.”

Mansfield suspects that Republicans are wary that if they grant Garland a hearing, he might perform well and thereby increase public pressure to confirm him.

“The reason the Republicans are opposed is the Supreme Court is now almost avowedly a political institution making political decisions or making legislative decisions for some time now, especially since 1973 with Roe v. Wade,” he said. “And so it’s very important politically for one party to maintain or acquire a majority. This would change the majority, this appointment, so I can see why the Republicans want to prevent that if they possibly can.”

The GOP freeze has recently shown signs of thawing, as more than a dozen Senate Republicans, including Sen. Mark Kirk of Illinois, who is facing a tough re-election fight, have said they would meet with Garland. Of those, a handful have also indicated they would support a hearing on his nomination, a public break with McConnell’s stance.

Analysts say the standoff over Garland is a big political wager for both Senate Republicans and Obama.

“It’s an interesting gamble by the president because he certainly must be aware that the Senate is not going to move on in any dramatic way until after the election,” said King. “If, in a lame duck session, it could well be that the Republicans — if they lose the Senate and if they lose the presidency — the Republicans could say, ‘OK, let’s just go ahead and approve this guy’ and then you have locked in for the next 10, 15 years somebody who is more moderate than the president would presumably want.”

“Republicans might be sorry they didn’t take this more moderate Democrat while they had the chance,” he said. “On the other hand, it doesn’t seem like they have too much to lose by waiting until the result of the election,” given that the GOP base has accused party leaders of repeatedly failing to deliver on their promises. “One way you can deliver something, which everyone understands, is by saying no.”