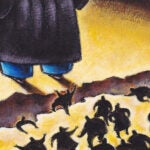 It’s rare that the sudden death of a 79-year-old man comes as a shock to the nation, but when that man is Supreme Court Associate Justice Antonin Scalia, a legal giant and defender of conservative jurisprudence with a rapier wit and formidable intellect, the reaction seems to fit the figure.

Scalia, a 1960 LL.B. graduate of Harvard Law School (HLS), was found dead Saturday at a West Texas resort. The loss touched many members of the Harvard community and prompted a flood of condolences, tributes, and memories from friends, colleagues, admirers, and ideological adversaries.

In a statement, President Barack Obama, J.D. ’91, called Scalia “one of the most consequential judges and thinkers to serve on the Supreme Court.” The entire court, including Chief Justice John Roberts, J.D. ’79, and Associate Justices Stephen Breyer, J.D. ’64, Elena Kagan, J.D. ’86, and Anthony Kennedy, LL.B. ’61, expressed admiration for his brilliant legal mind as well as for his warmth, wit, and outsized personality. Associate Justice Ruth Bader Ginsburg, a former HLS student and one of Scalia’s “best buddies” despite her often opposing viewpoint on matters before the court, said her opinions became better after reading Scalia’s dissents.

Scalia maintained close ties to Harvard throughout his dazzling 55-year legal career, returning frequently to teach, talk, and debate the issues of the day and to advise law students on how to argue cases before the sharpest judges.

“Justice Scalia will be remembered as one of the most influential jurists in American history. He changed how the court approaches statutory interpretation, and in countless areas introduced new ways of thinking about the Constitution and the role of the court that will remain important for years to come,” Dean Martha Minow of HLS said in a statement. “At Harvard Law School, we are deeply grateful that he returned so often to meet with our students, to judge our moot court competitions and — as he so loved to do — joust with law professors and students alike. He will be greatly missed.”

In 2006, the School and Kagan, who at that time was its dean, hosted Scalia to mark his 20th anniversary on the court. Later, Scalia and his wife, Maureen McCarthy, a 1960 Radcliffe College graduate, arranged for a 2008 profile by “60 Minutes” to be filmed at Gannett House, home of the Harvard Law Review, where he served as note editor.

“Justice Scalia was a titan of modern American jurisprudence. His brilliant legal mind, dynamic prose, and unmatched wit helped generations of students learn to love legal writing, reasoning, and debate, and his years as a scholar, public servant, and jurist exemplify a life spent in dedication to the law,” the Law Review said in a statement.

Series named in his honor

During his last visit to HLS, in November 2014, Scalia served as a judge for the final round of the Ames moot court competition and attended the inaugural lecture in a series named in his honor.

“Nino was memorably smart, gregarious, funny, playful — a good pal — as well as plainly serious about his studies,” recalled Frank Michelman, the Robert Walmsley University Professor emeritus at Harvard, whose friendship with Scalia began in 1957 when they entered HLS together. The two shared an office while working on the Law Review. “We talked about everything that came along, and I had no inkling then of differences between us over matters legal or political that developed or became apparent later.

“It’s not a big surprise to me that he would have mustered not just the intellect and style, but the ambition, conviction, confidence, and dedication to make the kind of mark on our law and life that he has, all of which I have hugely admired in my school-days companion even as I’ve sometimes, as he certainly knew and didn’t seem to mind, differed strongly with his arguments, theories, and positions,” Michelman said.

A former law clerk to Justice Scalia, Adrian Vermeule, the John H. Watson Jr. Professor of Law at HLS, called him “a courageous and warm-hearted man who had such an outsized influence on the court and on American law because he was not afraid to stick his neck out. He was not afraid to develop a theory that allowed others to criticize him when he fell short of his own principles. Many justices, fearing that sort of criticism, develop no articulate theory at all, and thus never end up saying much of anything that is memorable or influential.”

Indeed, Scalia’s larger-than-life persona was perhaps only bested by his outsized influence on legal thought and writing.

“That Justice Scalia was an original and a justice for the ages is beyond dispute,” said Laurence Tribe, the Carl M. Loeb University Professor and Professor of Law at HLS, in an email. “Nor can anyone question his extraordinary combination of legal brilliance and his ever-humorous way with the language — spoken and written not in starchy legalese but in ordinary English. History will record that Antonin Scalia, whom I will miss as a friend of over 30 years, changed the terms of legal discourse for generations to come.

“Even when he failed to score goals or touchdowns in the way specific cases turned out and particular issues were resolved, Nino redefined the playing field. Just preparing to argue a case before the court on which he was so delightfully active a questioner was a great experience, matched only by the thrill of sparring with a joyous and uninhibited interlocutor, something I had the privilege of doing dozens of times,” Tribe added.

“All of that said, what remains to be explained is how this one justice managed to make so huge a difference — and such a positive one — even to those who, like me, often disagreed deeply with the results his logic led him to embrace. The answer, I think, isn’t so much in his originalism: He famously said, ‘I may be an originalist, but I’m not a nut,’ a reservation that gave him license to decide which non-originalist precedents to accept as settled and which to whittle back as much as he could, hoping against hope eventually to win a majority to relegate those precedents to history’s dustbin,” Tribe said.

“His rarely admitted flexibility also gave him license to interpret provisions (like the Second Amendment), originally enacted in 1791, through lenses ground in the Reconstruction Era of the 1860s and 1870s (transforming the needs of a “well-regulated militia” into the rights of individuals to self-defense). And his faint-hearted originalism and selective textualism enabled him to claim, inaccurately, that the Fourteenth Amendment expressly barred any governmental consideration of race, even for purposes of inclusion and diversification. The answer to the mystery of Justice Scalia’s influence lies, rather, in his unswerving dedication to the rule of law and its rigors, even when the result was one he found politically and morally unpalatable, as with the flag-burning cases and some of the decisions in which he felt bound to rule not with the cops but with the robbers,” Tribe said.

Scalia’s death, creating the possibility of 4-4 votes in a group of high-profile cases, further ratchets up the political stakes in what is already one of the most contentious and chaotic presidential election cycles in modern American history.

Within hours of the news, many Republican leaders and conservatives called for Obama, who has almost a year left in his presidency, to forgo his constitutional power to nominate a successor during this election year and leave the selection to the next chief executive.

Senate Majority Leader Mitch McConnell, who controls that body’s legislative agenda, said that the Senate “should not” vote on any Obama nominee. But the president said he plans to name a replacement “in due time,” and he called on the Senate to fulfill its duty to provide “a fair hearing and a timely vote.”

Veteran political analyst David Gergen, public service professor of public leadership and co-director of the Center for Public Leadership at Harvard Kennedy School (HKS), said that what’s coming is “a political firestorm that is likely to grow in coming months.”

“Voters on both sides are now awakening to the reality that elections this November will decide the future direction not only of the White House and Senate but the Supreme Court as well. For the first time in memory, all three branches of government will be in play,” Gergen said in an email.

“If President Obama nominates an outstanding person to the Court — someone who commands enormous respect from the public — it is certainly possible that opinion will come down firmly on his side, and mainstream Republicans will break ranks, forcing a confirmation this year,” Gergen added.

“But the more likely outcome is that there will be a bloody fight that ends in gridlock. In that case, the next president will come into office with one vacancy to fill and as many as three additional vacancies to fill in a first term,” since Ginsburg, Breyer, and Kennedy are now in their 80s.

Steven Jarding, a lecturer in public policy at HKS and an authority on campaign management and political strategy, warned that while such an obstructionist strategy may help Republicans placate their base now, the move could end up riling both Democrats and independents who are fed up with years of gridlock in Washington.

“I think that they better be really careful with this one, because in this climate a lot of people are looking and saying, ‘We don’t like politicians to begin with.’ Well, this is a perfect example of a group of people playing politics, in this case with the lives and the legal constitutional rights of the American people,” he said. “I just don’t think there’ll be a lot of tolerance for it.”

With 11 months left in the Obama administration and the wait between nomination and confirmation averaging 71 days, Jarding said, “There’s plenty of time to name a justice; there’s plenty of time to get them approved. If this were George W. Bush and he had one year left, they wouldn’t be holding this up for the next president. If it was two or three months, maybe. But a year? Come on.”

“I think they are absolutely playing with fire,” said Jarding.