Higher education and the military 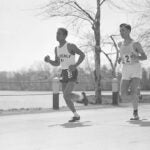 Stressing the importance of ensuring that the brightest and the bravest don’t live in separate worlds, Britain’s Sir William Francis Butler, a 19th century lieutenant general, once said, “The nation that makes a great distinction between its scholars and its warriors will have its thinking done by cowards and its fighting done by fools.”

Thanks to Harvard’s deep tradition of and respect for military service, “We will never become such a nation,” U.S. Secretary of the Navy Ray Mabus, J.D. ’75, said at a public address Wednesday evening at the Harvard Kennedy School.

Mabus’ talk, “Universities, the Navy and the Marines: Presence, Partnership, and the Way Ahead,” marked the five-year anniversary of the Naval Reserve Officers Training Corps (NROTC) program’s return to Harvard. The University formally resumed its relationship with NROTC following the repeal of “Don’t Ask, Don’t Tell,” the federal policy that required gay and lesbian service members to keep their sexual preferences quiet or face expulsion. The Army’s Reserve Officers’ Training Corps was reinstated on campus a year later.

Mabus said that because of University President Drew Faust’s early leadership on the issue, other universities, including Yale, Columbia and Princeton, followed suit. He presented Faust with a Marine Corps saber as symbolic thanks for her push to reinstate NROTC at Harvard after an absence that dated back to the Vietnam War era.

Faust said she was pleased that the number of NROTC and ROTC scholarship students is on the rise in the Class of 2020, and she hoped that is an indicator that more Harvard students will take on “the responsibility and privilege of defending our nation.” Only 1 percent of Americans serve in the military today.

Mabus touted numerous changes the Navy and Marine Corps have instituted in recent years to modernize, using renewable energy sources, and better serving the needs and expectations of today’s all-volunteer force. The improvements include more merit-based promotions, increased paid maternity leave, more flexible time-off benefits, and the opening of all service areas, including the elite Navy SEALs and the Marine infantry, to female recruits.

From the Army encampment of General George Washington, L.L.D. 1776, in Harvard Yard to the “Bloody 20th” Regiment of mostly Harvard-educated troops that endured substantial casualties in the Civil War, the University’s ties to the military are extensive. The University was one of the six original schools to participate in NROTC beginning in 1926, and still contributes significant research to aid the military. In addition, as Mabus noted, Harvard has produced the most Medal of Honor recipients of any educational institution in the country except the U.S. Naval Academy and the U.S. Military Academy at West Point.

“As citizens, we have an obligation to understand our military and to ensure that it and its members do not stand apart from our national life,” Faust said. “And as Harvard seeks to shape that society and educate its citizens and leaders, we must necessarily be connected to its military. We must ensure that Harvard students understand military service as a choice to consider and to honor even if, and especially if, they end up pursing other paths.”