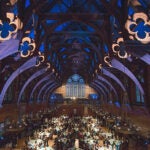 Aleksandar Shopov vividly remembers the day in July 2013 when he returned to a cherished spot — the Yedikule gardens, which line the old city walls of Istanbul — to find them surrounded by bulldozers. The gardens had fed people for 400 years. Now, the city planned to bury them in rubble and build a 90,000-square-meter park with cafes and an artificial river.

“I had to do something — and not just for a love of trees.” There was more at stake, said the Harvard doctoral student.

For the gardens were part of Istanbul’s history, a living example of a past in which agriculture was an integral part of the city. They had been tilled by Armenians, Greeks, Bulgarians, Albanians, and, more recently, Syrian and Afghan refugees. “Their destruction would be the destruction of that history that I study and write about,” he said.

Shopov is a Ph.D. candidate in the joint program of the Center for Middle Eastern Studies (CES) and the History Department in the Graduate School of Arts and Sciences. Originally from Skopje, Macedonia, Shopov said he grew up in a family of “poets, scientists, and revolutionaries” — his grandfather was the famous Macedonian poet and WWII resistance fighter Aco Shopov — so it was natural for him to help lead the fight to save the gardens. He organized peaceful protests and set up a field school at Yedikule, where he taught classes on farming, met with city officials, gave press conferences, and wrote about the history of the gardens.

Though he’s modest about the impact of his effort, one of his advisors, Alison Frank Johnson, history professor and director of graduate studies at CES, said Shopov’s “research has uncovered evidence that these farmlands deserve historical protection just as historical buildings do. Recently, development of one of these gardens has been halted, due to the evidence Shopov uncovered.”

“In my 25 years at Harvard, I have met many inspiring students who have been involved in activist initiatives,” she said. “Aleks is in his own league.”

Shopov’s dissertation, on the intersection of science, poetics, politics, and the natural environment in the production of food during the Ottoman period, brought him to Istanbul, a city that, as the setting of folk stories he’d grown up hearing, had long fired his imagination. “For me, Istanbul was not a foreign place,” he said with a broad grin.

Istanbul was important to his fieldwork, he said, because there he could build on his archival discoveries with observation of the historic produce gardens that still exist in the heart of the city. For the past two years, he has co-taught a course in the Harvard Summer School program in Istanbul with his adviser, Cemal Kafadar, which focuses on the city and its agriculture, including the Yedikule gardens.

The fact that such ancient gardens are disappearing now, is “tragic,” said Shopov, particularly when so many people are becoming interested in urban farming, a practice that he says relates to “modern concepts like food justice and sustainable cities. When food is produced locally, farming practices are more visible to consumers,” he said, “so laborers are less likely to be unpaid and mistreated, or pesticides” used.

The Yedikule gardens are important not only because they feed people but because they bring together diverse communities, said Shopov, who takes exception to how his homeland is typically portrayed in popular culture. The prevalent image of the eastern Mediterranean as divided along ethnic and religious lines and racked by strife “is a recent political construct,” he said. “One of the biggest struggles happening in both Istanbul and my home city, Skopje, is a class struggle, as people have less and less control over their city.”

Nevertheless, despite the devastation wrought by the wars of the 20th century, “Skopje preserved many of its Ottoman caravansaries, hamams (baths), churches, mosques, madrasas,” proof of a vibrant, multicultural city.

“When those public places are erased, it moves people into arenas where demagoguery can take place. People are being channeled into arenas where politics are being received rather than discussed,” he said. “A narrowing of availability of public spaces affects the political future of this country and other places in the world.”