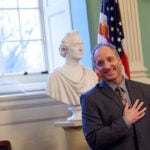 Erickson, who was born in Boston on Feb. 6, 1928, earned a bachelor’s degree in biology from Middlebury College in 1949. He then enlisted in the U.S. Air Force as a laboratory specialist. After his active military service, Erickson began studying embryology at Boston University. He completed his Ph.D. in biology in 1960 before joining the Worcester Foundation for Experimental Biology as a research scientist. He later earned a master’s degree in library science from Simmons College.

Erickson was hired as associate librarian of Harvard College in 1966. As science specialist for the Harvard University Libraries, he was instrumental in the planning and construction of the Cabot Library. His position as librarian of the Cabot Library and as a member of the Faculty of Arts and Sciences lasted until 1991 and was marked by his collaborative leadership, integrity, insight, and fairness.

During his tenure at Cabot Library, he always celebrated the first day of spring by placing daffodils on every table of the library.

He remained active after retirement as a member and officer of the Harvard University Retiree Association (HURA). A highlight of his professional career was his tenure as member of the board for the BIOSIS Company, a life sciences citation index that is now part of Thomson Reuters.

He will be greatly missed by his friends and family for his kindness, creativity, wit, and his ability to find and share beauty with those around him.

Visiting hours will be 4 to 7 p.m. on Friday April 15, at Eaton’s Funeral Home, 1351 Highland Avenue, Needham, Mass. A memorial service is planned for Saturday (April 16) at 2 p.m. at Carter Memorial Methodist Church, 800 Highland Ave., Needham Heights. Memorial donations in lieu of flowers may be made to the Alzheimer’s Association or The Walker Home, 1968 Central Ave., Needham, MA 02492.