A way with other words 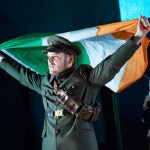 Sexism, racism, and even neglect can stand in the way of a great writer receiving a Nobel Prize.

But of all the barriers, it is language that remains the most significant, Per Wästberg, the chairman of the five-member Nobel Committee for Literature, told a Harvard audience on Tuesday.

Although committee members read English, German, French, some Spanish, and Russian, and rely on a network of experts in 15 languages, they cannot possibly read or understand the thousands of languages that exist around the world, Wästberg said.

India, for example, has 16 official languages; South Africa 11. “The Nobel statutes make it clear that prize proposals written in other languages that the Academy cannot interpret ‘without great trouble or considerable expense’ need not be taken into account. This applies to the vast majority of the 6,000 languages around the world,” he said.

Some have suggested that the Academy try to identify people who write in “neglected” languages such as Urdu, Swahili, or Yoruba by using sworn experts, “but such a procedure would politicize the prize,” said Wästberg. He said that “practically every prize is somewhere seen as a political gesture,” and cited Mo Yan, who he thinks is “perhaps the greatest prose writer in the world today,” but is “wrongly seen as a tool for his government.”

Wästberg said when he first joined the Swedish Academy almost 20 years ago, “I expected to be traveling across the globe with a GPS to find hidden treasures. Not at all! One did not look for a dark-skinned Inuit, though they do exist, or for a lesbian in Tonga in order to cover human variety or just minorities,” Wästberg said. That year, the prize went to Jose Saramago, a Portuguese writer.

Wästberg called Alfred Nobel, who established the eponymous awards, “a cosmopolitan who prescribed his prize to be awarded to individuals regardless of nation, gender, religion, and to those who, in his words, had ‘conferred the greatest benefit to mankind.’”

But, “Because of the attention it receives around the world and because of its prestige, Nobel laureates have inevitably come to be seen as forming a canon which has provoked critical reproach that many of the greatest 20th-century writers are missing from the list. That includes too few women, too few non-Europeans, and too many mediocrities.”

After World War II, Nobel Awards went to “‘the great precursors’ — Hermann Hesse, Andre Gide, T.S. Eliot and William Faulkner — which, regrettably, meant that women were overlooked, [such as] Anna Akhmatova, Karen Blixen, Elsa Morante, and Simone de Beauvoir,” Wästberg added. Other giants in literature, such as Virginia Woolf, were “overlooked by the proposers in their own countries,” he said.

Nonetheless, while some great writers have not been recognized, Wästberg said “the Academy may pride itself on discovering great writers ahead of the general public” — such as Faulkner, Isaac Bashevis Singer, Elias Canetti, Rabindranath Tagore, Naguib Mahfouz, Wole Soyinka, and Derek Walcott.

The Swedish Academy, which awards the Nobels, receives 230 literature nominations from nearly twice as many individuals, universities, and other institutions each year. That number is narrowed down to an “expectancy” list of 25, from which five writers are singled in May “for intensive summer reading,” followed by three days of discussion.

“Then we meet an unbelieving world press. Jubilation and outrage follow,” Wästberg said.

Wästberg’s talk, “Nobel Prize Winners: The Selection Process and Related Stories” was part of an annual writers program, “Complexities of Color.” His three-day visit included speaking to classes, meeting with individual students, and a luncheon with Nieman Fellows. The visit was sponsored by the Harvard Foundation for Intercultural and Race Relations in collaboration with the Department of Comparative Literature.

Harvard College senior Cary Williams, who interviewed Wästberg after his talk, said, “It was an honor to get to be in dialogue with Dr. Wästberg and to hear his stories of a life dedicated to the production and love of the written word. In this climate of tense race relations in America, many of my peers have turned to writing, in many genres, as a way to raise their voice.”