The making of two educators 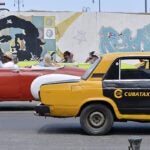 Drew Faust, brother Donald Gilpin explain what teaching has meant to them

Two siblings with long careers in education shared their thoughts on pedagogy during a discussion on Monday evening. The presence of Drew Gilpin Faust, the 28th president of Harvard University and the Lincoln Professor of History, made this Askwith Forum noteworthy. But the input of her brother, Donald Gilpin, a retired teacher of English and drama, sparked both memories and insights.

To kick off the conversation, which was moderated by James E. Ryan, dean and Charles William Eliot Professor of Education at Harvard’s Graduate School of Education (HGSE), the siblings took turns introducing each other. Faust recalled how her younger brother took a year off from Princeton University, which their father had attended, to teach in Labrador, Canada. Early on in his 41-year career in both public and private schools, her brother exhibited “a passion for teaching,” she said, motivated by “his students and the effort to inspire them to learn and to grow,” and by a love of his subjects, English and drama.

The two were raised in rural Virginia along with two other brothers, one older and one younger. Gilpin praised his sister’s strength and determination, particularly in the face of the sexism of the times. With three brothers, Faust grew up in a “male-dominated world,” he said, but came from a family with “a number of powerful, principled women.”

Unlike her brother, Faust did not originally intend to teach. Addressing the packed Longfellow Hall, she described graduating from Bryn Mawr College in 1968, a turbulent time when “the world was exploding.” Following her politically active undergraduate years, she sought to make a difference by working with the federal Department of Housing and Urban Development. After two years, however, “I so missed being in an environment of learning,” and she returned to graduate school.

Faust said the choice was plagued by doubt. Had she made the right decision? As much as she loved being in an academic setting, could she cut it as a teacher? Her misgivings were settled, she recalled, “when I had my first assignment as a teaching fellow. I just loved it so much.”

Both siblings acknowledged downsides to their chosen profession. For Gilpin, it was the paperwork. For Faust, it was the anxiety caused by her own expectations. She said that her husband, Charles E. Rosenberg, professor of the history of science and medicine and the Ernest E. Monrad Professor in the Social Sciences at Harvard University, helped her with those by telling her that Celtics Hall of Fame center William “Bill” Russell supposedly suffered from such anxiety that he “threw up before every basketball game,” she remembered. She was able to confirm that story in 2007, when Russell received an honorary doctor of laws.

“You’ve been a huge influence on my life,” she told him at a celebratory dinner, and went on to explain. The Celtics great then shared another anecdote, of a time when their coach hurriedly called the team back into the locker room just as a game was starting. “We were concerned,” she recalls Russell saying. “What are we doing? What’s wrong? And he sat them down and said, ‘Russell hasn’t thrown up yet.’”

The president told the forum that she also learned much from her brother. “When I was first a teaching fellow and Donald had been teaching for several years, I asked him to observe my class.”

She said while her habit was to focus “on the substance” of what she was teaching ― “Have we read everything? All the material?” — her brother showed her a different approach. After observing the class, she recalled, “Donald said, ‘You know, if you moved to the other side of the room where the students were so silent, I bet you could have gotten them to talk.’ Just that simple thing, and I thought, ‘This is a craft and I have to learn more about it.’”

Everyone does, both siblings stressed. As education becomes increasingly commodified, Faust called for a national reassessment. “We need a public discourse on education,” she said.

“What is the purpose of education? Can we please talk about it as something that has more than vocational purpose? It’s about civic engagement, it’s about human engagement and meaningful lives, not just fitting people into various cubbyholes,” Faust said.

“Why can’t we have a more capacious view of what education is, what it consists of, and also what it’s for?” She called on the assembled educators, students, and interested members of the public to insist on this conversation. “Having our leaders begin to talk that way is the beginning of having it filter down.”