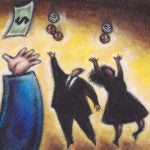 Gearing up for what will likely be a major political battle, on Wednesday President Obama, J.D. ’91, nominated Merrick B. Garland ’74, J.D. ’77, to fill the U.S. Supreme Court vacancy left by the death of influential Associate Justice Antonin Scalia, L.L.B. ’60, last month.

Well-respected by both Democrats and Republicans, Garland, the chief judge of the U.S. Court of Appeals for the District of Columbia, “is widely recognized not only as one of America’s sharpest legal minds, but someone who brings to his work a spirit of decency, modesty, integrity, even-handedness and excellence,” Obama said during his introduction at the White House.

Known as a moderate jurist, Garland, 63, was nominated to the D.C. Circuit Court in 1997 by President Bill Clinton.

He came to national prominence in 1994 for his lead role in the Oklahoma City bombing case and the “Unabomber” prosecutions. He was elected to Harvard’s Board of Overseers in 2003 and served as its president from 2009 to 2010.

Laurence H. Tribe, the Carl M. Loeb University Professor and Professor of Constitutional Law at HLS, discussed the nomination with the Gazette via email, along with the upcoming clash between the Obama administration and the Republican-led Senate Judiciary Committee, many of whose members want the next president to fill the court seat.

GAZETTE: What is your impression of or experience with Garland? What’s his reputation?

TRIBE: Merrick Garland is a brilliant jurist whom I’ve known well and admired greatly ever since he was my student in advanced constitutional law in 1975-76. His modesty, humility, and moderation make him a particularly suitable choice for these divided times, and it doesn’t hurt that everybody seems to like him enormously. No sitting judge in the country — state or federal — has a more stellar reputation as a thoughtful analyst with a firm commitment to the rule of law and to the proper reach of the judicial role. And that stellar reputation is one that Judge Garland has amply earned. To put it simply, he would be a truly great Supreme Court justice. Anyone who watched and listened as Judge Garland delivered the comments following the president’s eloquent nominating remarks should be reassured by the humanity and grace that accompanies his brilliance. I, for one, have never heard a better or more moving statement by a Supreme Court nominee. 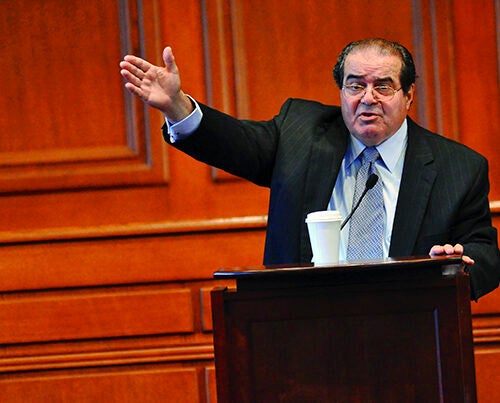 GAZETTE: What does his judicial record tell us?

TRIBE: That he is an open-minded jurist of impeccable integrity and fairness, that he is faithful to the ideals embodied in the tradition of following binding precedent, and above all that he is fiercely dedicated to the demands of the legal craft and to the Constitution and laws of the United States. At the same time, he has invariably displayed great sensitivity to the lived experience of the parties before him and to the likely human impact of his rulings. Whatever his personal views (about which he and I have never had occasion to speak), everyone with a case before the U.S. Court of Appeals, on which he has sat for nearly two decades, has reported that Judge Garland listened carefully and reached a fair and well-reasoned conclusion rather than a conclusion driven by any personal or political, much less partisan, agenda.

GAZETTE: What are his strengths and weaknesses both legally and politically?

TRIBE: I can’t identify any legal weaknesses although, being human, he must have some. For his own part, Merrick Garland is much too humble to feel comfortable suggesting that he is without flaws. As for his strengths and weaknesses politically, all I can say is that I think Garland is about as apolitical as any judge can be, although he certainly isn’t so naïve as to believe that law and politics in the broadest and highest sense occupy two entirely separate spheres. It is the height of irony that senators who know full well that nobody in the nation is better qualified to sit on our nation’s highest court than Judge Garland — and that his entire life is a testament to fairness and decency — should threaten to treat him, and the president who nominated him after exhaustive consideration and consultation, so shabbily as to slam the doors of the Senate in his face and in the face of a president who still has the greater part of a year to serve in the term to which he was elected in 2012.

In that sense, the president’s choice represented both a decision to transcend politics and a political masterstroke. Any selection that might have smacked of identity politics would have been vulnerable on that ground, while a selection so evidently made on the basis of sheer excellence — the basis that the president announced when he made this choice — is as likely as any selection could possibly be to undermine whatever public support might otherwise exist for the Senate’s stubborn refusal to accord the nominee a fair and timely hearing and a floor vote.

GAZETTE: What do you anticipate will happen with this nomination, and is there any legal recourse for President Obama (or anyone else) to get around a Senate obstruction? If so, what’s the likely argument to be made to challenge the refusal to consider and advise?

TRIBE: My crystal ball is in the shop for repair, so I can’t offer any confident predictions about what will happen with this nomination. There is no “legal recourse” as such for President Obama or anyone else to circumvent Senate obstruction, if by legal recourse you mean recourse to a parliamentary or judicial maneuver. But the Senate’s constitutional obligation under Article II to provide its “advice and consent” is what I’d call self-executing. That is, the Senate’s constitutional duty doesn’t depend on whether any government official is in a position to drag the senators kicking and screaming to discharge the obligation the Constitution imposes on them by entering in good faith into the constitutional process that has been followed in all such cases from the beginning of our republic.

That process, and the constitutional duty that underlies it, is a process that cannot be reconciled with senatorial stonewalling of a presidential nominee to the Supreme Court, which is the only court created and required by the Constitution itself. And certainly the approach threatened by the Senate even before Judge Garland was named — an approach that was shamelessly reiterated by the majority leader right after Garland was nominated — cannot be defended on any of the self-evidently partisan grounds that some senators are offering as justification for not following the unbroken precedent of at least meeting with a president’s Supreme Court nominee, holding hearings on the nominee’s qualifications and vision of the law, and voting one way or the other on the nominee’s confirmation.

The argument that the American voters should have a voice in choosing the next nominee makes no sense at all in a situation where the nominee was indeed selected by the president whom the American voters chose to lead the country by a clear electoral majority and by a margin of millions of popular votes as recently as November 2012. Unless one accepts the implicit idea, grounded in what must candidly be called simple bigotry, that Barack Obama has never truly been the lawfully elected president of the United States, or the equally counter-constitutional idea that this president, unlike his predecessors, lacks the authority to perform the duties of that office for his full four-year term, one simply cannot countenance the notion that only those who cast their votes for the next president this Nov. 8 have a legitimate say in the matter.

That’s a position that has no logical endpoint: One might as well argue that, given the deliberately counter-majoritarian character of the Supreme Court as an institution, only a president elected by at least a two-thirds majority of the American people can legitimately appoint a new Supreme Court justice, or that a president cannot make a legitimate Supreme Court appointment except in the year immediately following his election as the nation’s chief executive. Those arguments would surely be rejected as ludicrous. The one the Senate’s leaders are making now is no less so.

Equally significant, I believe, is the enormous danger the Senate’s current posture poses to the vital American institution of an independent federal judiciary — one selected through the constitutionally specified process rather than in an ad hoc plebiscite gerrymandered to fit the political occasion. What principle could possibly justify inflicting that wound on the court as an institution and on the process of determining its composition? To suggest that only the election following a sitting justice’s sudden death can be relied upon to provide majoritarian legitimacy to that justice’s successor is to open a huge can of ugly and dangerous worms. That suggestion poses an awful threat to the ideal of a Supreme Court that is, to the degree possible, above partisan politics. Whenever the court has shaken that ideal, as many believe it did in Bush v. Gore, it has suffered a self-inflicted wound. Now the Senate’s Republican leaders are proposing to inflict such a wound on their own. Have they no shame at all?

Follow the Gazette for continuing coverage of the U.S. Supreme Court nomination process.