Institute of Politics, 50 years in 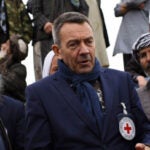 On anniversary, alumni reflect on how it framed their future careers in public service

At a time when the noble aim of politics feels like it has been consumed by negativity, the Institute of Politics (IOP) at Harvard Kennedy School (HKS) has stayed true to the notion that politics and even governing can be forces for good.

Established as a memorial to President John F. Kennedy and his famous call to America’s youth to give back to the country, for half a century the IOP has inspired and prepared Harvard undergraduates to consider and take up a life in politics and public service through an array of offerings, including its fellows program, summer internships, and lectures by world leaders and newsmakers in the JFK Jr. Forum.

This week, alumni and fellows will return to campus as the IOP hosts a three-day celebration Thursday through Saturday to mark its 50th anniversary.

50 years of history at the IOP

Rep. Elise Stefanik ’06, who represents New York’s 21st Congressional District and at age 30 is the youngest woman ever elected to the U.S. House, got her start when she was chosen to help run a weekly study group for Ted Sorensen, President Kennedy’s former speechwriter, then a senior IOP fellow. “That to me was just an amazing experience. After that, I was hooked,” she said.

While at Harvard, Stefanik also taught civics to Boston and Cambridge public school students as part of the IOP’s civics program, worked on the Harvard Public Opinion Project, and launched the Women’s Initiative in Leadership program during her senior year. She credits the IOP with instilling the skills and confidence that prepared her to run for office.

“There is no other institution around the world that is at the caliber of the Institute of Politics in terms of exposure and having a seat at the table to discuss issues with world leaders, political practitioners, and well-respected members of the media,” she said.

For Massachusetts State Sen. Eric Lesser ’07, the IOP led him to volunteer for the presidential campaign of Barack Obama in 2007-2008, right after his graduation.

“I think what the IOP did more than anything was just draw in my perspective and really taught me that there were a lot of other people … who had idealism about the process, that had idealism about the need to get involved,” said Lesser, who went on to work as an aide to the Obama campaign’s chief strategist, David Axelrod, in the White House, where the institute’s impressive alumni network was a professional and social boon for a young staffer.

“The chance to meet so many other students your age, similar in the same types of work that you are doing, who are also motivated by this idealistic sense that government can be a source for good for people, is a unique opportunity. And it will serve you your whole career because those friendships you’ll make at the IOP — the relationships you’ll build at the IOP — they’re your classmates and friends, and they’re also going to be your colleagues for years into the future.”

The future of politics

“For me, their summer stipend [$500] proved a defining part of my career because it allowed me to go to Washington to intern for my congressman, Rev. Robert Drinan, the Jesuit priest, a Democrat from Massachusetts,” said Mark Gearan ’78, former head of the Peace Corps and now president of Hobart and William Smith Colleges in New York.

“It allowed me to see pathways into public policy for careers; it allowed me to exchange ideas with people who were very different from me. My senior college roommate was then the president of the Republican Club, [conservative radio talk show host] Hugh Hewitt. We were an unlikely rooming pair politically. But I think that has always been a hallmark of the institute — working in a nonpartisan way to encourage young people to think about careers in politics and public service,” he said. “That was important in 1978 when I was there … [and] it could not be more important for what the institute’s doing for the next 50 years.”