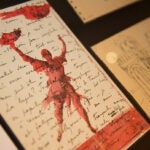 In his own works

Twenty years ago, Meg L. Winslow became Mount Auburn Cemetery’s first curator of historical collections, and no less a sleuth of the grounds’ statues and monuments.

“I was frequently crawling around on the ground trying to find makers’ marks and artists’ signatures,” said Winslow, who oversees the cemetery’s wealth of archives — photos, correspondence, books, and the records related to its more than 60,000 monuments.

As the names and dates on those monuments came into view, so did a picture of the cemetery as one of the country’s most important early museums. The names belonged to noted American sculptors, artists, and architects, many of whom had trained in Rome and other European capitals and returned home to practice their craft. For many struggling artists the cemetery’s proximity to Boston proved ideal. Wealthy residents eager to support the arts became their patrons, and the novel cemetery that blended art and nature helped them launch their careers.

“Mount Auburn,” said Winslow, “provided a venue where the work of this first generation of artists could be seen by a broad public.”

That work ranges from a massive stone sphinx to neoclassical temples and pedestals to statues of dogs carved from marble.

A selection of these evocative funerary sculptures and monuments is the subject of a new book by Winslow and Harvard’s Melissa Banta. “The Art of Commemoration and America’s First Rural Cemetery: Mount Auburn’s Significant Monument Collection” was funded with a Museums for America stewardship grant from the Institute of Museum and Library Services. Mount Auburn is the first cemetery in the country to receive such a grant.

The 82-page illustrated book — with a foreword by Dave Barnett, CEO of Mount Auburn, and an introductory essay by David B. Dearinger, the Boston Athenæum’s director of exhibitions — was published in the fall. Along with exploring the development of American commemorative art in the mid-19th century, it also serves as a vivid guide to 30 of the 175-acre cemetery’s most important memorials.

“We want to get people out into the landscape with a new vision and vocabulary with which to appreciate these monuments,” said Banta, who along with her post as consulting curator at the cemetery works as a curator at Harvard Library’s Weissman Preservation Center and Harvard Business School’s Baker Library.

Choosing which monuments to highlight wasn’t easy. To narrow the field, Winslow developed criteria related to historic, artistic, and scenic significance. The result is a rich array of monuments presented in four categories: architectural inspirations, family affinities, allegories and symbols, and public and private narratives.

The allegories and symbols chapter covers one of the cemetery’s most famous works. The Binney monument, along the Heath Path, honors the life of the physician Amos Binney, co-founder of the Boston Society of Natural History. The work, commissioned by Binney’s widow, Mary Ann, in 1847, is by the American sculptor Thomas Crawford. Carved from white Italian marble, Crawford’s statue depicts Binney’s spirit on one side arising to heaven. Above him hangs a wreath, symbolizing the virtue of the deceased, filled with poppies, symbolic of eternal sleep. On the opposite façade, a woman, her head bowed, her hand covering her face, carries an urn of ashes.

“It’s the most important work of art that’s at Mount Auburn,” Winslow said. “From an art historian’s point of view, it’s a national treasure.”

Indeed, the National Trust for Historic Preservation and the White House Millennium Council to Save America’s Treasures designated the monument a national treasure in 1999. (Crawford’s best-known work, “Statue of Freedom,” crowns the dome of the U.S. Capitol.)

Nearby, a smaller monument tells another tale of love and devotion. Nestled on a hill at the end of Anemone Path, the memorial for the Shakespearean actor Edwin Booth, the brother of John Wilkes Booth, assassin of President Abraham Lincoln, stands out to Banta not for its tragic family tie but for the care and attention that Edwin Booth’s daughter took with her father’s grave marker.

“We found this wonderful account of his monument describing the role that his daughter played in the creation of it, and what an excellent likeness she felt the portrait was of her father.”

A round bas-relief portrait of Booth adorns the front of the neoclassical monument, which was designed by Stanford White. Below it the word “Father” is inscribed in the stone. Farther down is a verse from the Bible. On the back of the monument White incorporated Augustus Saint-Gaudens’ design of the masks representing comedy and tragedy within a laurel wreath, and a line from “Much Ado About Nothing.”

“Meg and I were out on the grounds one day and we saw the word ‘Father’ carved in very faint letters on the monument — it was something we had never noticed before,” said Banta. “It’s these details, coupled with poignant accounts found in the Mount Auburn’s primary documents, that provide the historical context for the monuments and link you to these stories which are so human and universal.”

Harvard connections are plenty at Mount Auburn. One of the cemetery’s founders was Dane Professor of Law Joseph Story, and the site’s Harvard Hill has long been reserved for professors. In more recent years, Harvard President Drew Faust consulted the cemetery’s historical collections while researching her 2008 book, “This Republic of Suffering: Death and the American Civil War.” Several Harvard-related memorials are featured in Winslow and Banta’s book.

Opened in 1831, Mount Auburn was created as an alternative to the rapidly filling burial grounds in Boston, to help address health concerns associated with overcrowded graveyards and to offer up a new vision for what a cemetery could be: both a designed landscape open to the public and a place for remembrance, reverence, and reflection.

“It was designed as a horticultural landscape to bury the dead, to comfort the bereaved, and to inspire the living,” said Winslow.

Both Winslow, who said she was instantly smitten with the beauty of the landscape when she first passed through the cemetery’s massive gates two decades ago, and Banta, who has worked in the historical collections department since 2008, want Mount Auburn to be their final resting place.

“We will be among a lot of interesting company,” Banta said.

“The Art of Commemoration and America’s First Rural Cemetery” is available at the Mount Auburn Cemetery Visitor Center, the Harvard Coop, the Harvard Book Store, Porter Square Books, and through www.mountauburn.org.