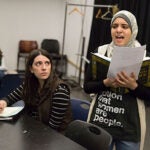 Blended voices, each with a personal charge

Radcliffe has panelists, comedians, and an author explore how we talk about language and gender

Times change and language changes right along with them. Facebook now offers dozens of different gender identity options. The use of “they” as a gender-neutral singular pronoun was selected as the Word of the Year by the American Dialect Society. The intentional misidentification of a person’s preferred name, pronoun, or title is now considered a violation of New York City’s anti-discrimination code.

All of this makes timely Radcliffe Institute’s “Ways with Words: Exploring Language and Gender” conference on Thursday and Friday.

Standup comedian Aparna Nancherla will start the arts event, which will also feature ImprovBoston performers. Nancherla is a rising star with a devoted following on Twitter, where she shares insights including, “I once dated an apostrophe. Too possessive” and “’Hmmm, 15 exclamation points or 5000?’ — girl texts.”

Friday’s program explores the interplay of gender and language. The broad array of speakers, from academics and poets to pollsters and linguists, includes the author and trans advocate Janet Mock. Mock’s clear-sighted memoir about her quest for gender selfhood, “Redefining Realness,” is on the New York Times best-seller list. She will shed light on what she calls “the shifting world of gender identity.”

“As a writer and as a trans woman, I know the limitations of language. But we have to bring our lived experience to language,” said Mock from her New York City office.

Asked about the changing pronoun landscape, she said, “You need to create more space for people to declare and define themselves. Pronouns are one of the first personal labels we use to describe ourselves. In gender-discourse spaces, people often start with, ‘My name is such-and-such and these are my pronouns.’ That’s where we’re evolving.”

Mock, who earned her master’s degree in journalism from New York University, noted, “Having been trained as a journalist myself, I try to work at getting the facts. If that [pronoun] is how they identify and how they describe their lives, [language] should reflect that. It shouldn’t reflect your own binary sense of what gender is.”

Mock’s use of preferred identifiers is rooted in her recognition of the damage done when language is used to deny a person’s experience: “Language is one of the first spaces in which a trans person is negated. It’s often someone saying, ‘No, no, no. You’re not a girl, you’re a boy.’ Or a teacher on an attendance sheet calling out someone’s given name, versus one they had given themselves.”

“Ways with Words: Exploring Language and Gender” is free and open to the public. The event will also be webcast live. For more information, visit the website.