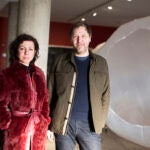 The acclaimed Irish author and playwright Colm Tóibín will visit Harvard on Monday for a conversation with Claire Messud, a senior lecturer and fellow novelist, as part of the Mahindra Humanities Center’s Writers Speak series.

Tóibín has been shortlisted for the Man Booker Prize three times — for “The Blackwater Lightship” (1999), “The Master” (2004), and “The Testament of Mary” (2012) — and his latest work, a study of the poet Elizabeth Bishop, was recently named a finalist for the National Book Critics Circle Award in criticism.

A professor of English at Columbia University, Tóibín comes to Harvard just as the New Rep Theatre in Watertown is performing his stage adaptation of “Mary,” and only weeks before he pays Hollywood a social call for “Brooklyn,” the film based on his 2009 novel. The movie has been nominated for three Oscars, including Best Picture.

GAZETTE: “Brooklyn” is about leaving home (in this case, a young Irish immigrant’s move to America in the 1950s) and the ability to find the strength to build one’s own world. What drew you to this particularly powerful time in life?

TÓIBÍN: I was teaching for a semester at the University of Texas in 2006. I got to miss home. I’d never been that far away from the sea. I’d come to notice I was missing things in Ireland I had previously taken for granted. At the same time, I had been thinking about a story about a girl who went to Brooklyn in the ’50s and when she went back to Ireland didn’t tell her family she was married. Also, I had been teaching Henry James’ “Washington Square,” thinking about a heroine who was highly unself-conscious, but whose feelings run very deep.

GAZETTE: Many of your books, including “Brooklyn,” “Nora Webster,” and “The Master,” have a recurring theme of being alone in the world. How has that part of your own experience framed so much of your work?

TÓIBÍN: I wonder if the novel lends itself to that idea of a solitary protagonist. In a novel, you can see what a person is thinking or feeling. And then we can be shown what they are saying. And you can see the distance between the two things. That’s the drama in a novel. A novel tends to work best with single individuals — their life, feelings, sensibility — whereas drama in theater tends to work best with a group or a family.

I’m not sure it comes out of anything personal except I tend always to have a single individual at the heart of a novel. I have one person doing the noticing or suffering or feeling. You can separate her or him from the family. It will give you enough in their consciousness and memories. I couldn’t imagine writing a social novel.

GAZETTE: Ireland has given the world so many great writers. What storytellers did you admire growing up?

TÓIBÍN: When I was starting to read and buy books for myself, I wouldn’t buy an Irish author. I would have bought Hemingway or Kafka or Sartre. Until my 20s, I wasn’t interested in what I’d inherited. Once the censorship ban in Ireland was lifted, every book came in and everyone was interested in fiction from elsewhere. D.H. Lawrence was such a big deal when I was growing up. Sexuality, desire, people moving from one class to another — all that was pretty interesting when I was 18. William Faulkner was also all the rage. Those books came in Penguin editions and they were everywhere.

GAZETTE: You’re from Ireland, but spend a good amount of time in America. What does it offer you in your life and work?

TÓIBÍN: I teach one semester a year at Columbia. I really like my students and the Upper West Side — Carnegie Hall, Lincoln Center, the Met, MoMA. It’s a funny sort of New York. It’s like a village. It’s a foreign country in many ways and I enjoy that I get good work done when I’m there. It’s good to get out of a small island like Ireland to another, even smaller island, which is the Upper West Side of New York.

GAZETTE: Ireland was in the soul of Joyce and Beckett, but each did much of his best work abroad. You’ve taught in many places. Do you feel that you had to leave to understand your homeland or polish your art?

TÓIBÍN: I can work anywhere. I just need a table. It’s not at all planned or worked out.

GAZETTE: What advice do you have for aspiring writers? What do you wish you’d been told years ago?

TÓIBÍN: There wasn’t anything I didn’t know. The big thing is you should finish things when you start them. Do not stop a book halfway through.