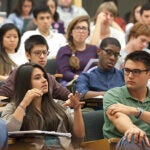 Reflects on how the world works

“When you get into a taxi, that’s a contract,” he said. “You don’t have to sign a piece of paper; you don’t need to. The assumption is that the driver will take you where you want to go, and that you’ll pay him when you arrive. The same is true of going to a restaurant. It’s not written down, but it’s understood that you’ll pay at the end of the transaction.”

That understanding, Fried said, is critical to contracts in particular, and human interactions in general. “Understanding is the basis of getting anything done together; it’s the foundation of collaboration. Not only are you working together, but you’re going in the same direction, at a speed that works for everyone. That understanding is how the world works.”

Fried spoke at the Faculty Speaker Series at the Harvard Ed Portal in Allston last week, drawing from his HarvardX course “Contract Law: From Trust to Promise to Contract.” More than 40 people from Allston, Brighton, and Cambridge turned out to hear his thoughts on the theoretical background of contracts, trust, and promises, while hundreds more from around the world — including countries such as the Democratic Republic of Congo, Vietnam, Canada, Colombia, Brazil, and the Dominican Republic — joined in via online streaming video.

One of the best depictions of a breakdown in understanding, Fried said, is the parable of the Tower of Babel. Fried examined a painting by 16th-century artist Pieter Bruegel the Elder on the subject (“Tower of Babel,” 1563). Taken from the Book of Genesis, the parable claims that the people of the city were determined to build a tower so tall that it would reach the heavens. Affronted, God “confuse[d] their language,” rendering the builders unable to communicate.

While the parable is generally taken as an ancient explanation for the evolution of different languages, Fried noticed something deeper in Hieronymus Bosch’s tower rendition: work didn’t just stall, but began to collapse completely.

“It’s an absolute wreck,” Fried observed. “When they could no longer understand each other, they can’t go any further. Contracts are about collaboration, and collaboration requires mutual communication and understanding. You must have understanding to move into the future together.”

Leanne Fan, who consults with the Allston-Brighton Community Development Corporation, attended the event “to hear from a world-class academic on his subject.”

“I’ve always wanted to have a layman’s understanding of contracts and I work in affordable housing,” she said. “It’s great to know that if you want to learn more, you can through HarvardX. We live in an amazing time, and it’s a great opportunity.”

Although Fried’s HarvardX course “Contract Law: From Trust to Promise to Contract” began in late January.