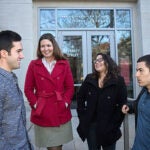 Taking people ‘to where they want to be’

It’s harder for them to raise startup capital, but there are paths through the maze, panel says

The road to success for female entrepreneurs remains a steep climb, but women who combine passion for their company mission with smart business strategy have a shot at making it to the top in the competitive marketplace.

That was the theme of “She Got Game,” a panel discussion at the Harvard Business School (HBS) on Wednesday about the challenges that women face in starting and growing large-scale businesses, and how they are learning to overcome them.

The forum, part of the Harvard Business School Association of Boston’s new venture competition event series, featured four women who have navigated their way through the still-male-dominated world of entrepreneurial startups. In addition to recounting their stories, they offered tips and encouragement to other women with business dreams.

“Just get used to the fear,” said Susan Hunt Stevens, co-founder and CEO of WeSpire, about the anxiety that comes with trying to start and build a company “There is constant fear. But it’s so much fun, the fear kind of motivates you.”

Stevens, whose firm helps businesses improve employee engagement, said the failure of a previous firm she started taught her “to make sure you are in love with the problem” the business seeks to address ― “Not the product, not the service, but the problem you are solving.”

Lynda M. Applegate, the Sarofim-Rock Professor of Business Administration at HBS and the panel’s moderator, cited the results of a 2014 study by Babson College to underscore the difficulties women face in a critical area of entrepreneurship: raising capital.

The study found that less than 3 percent of firms receiving venture capital funding had female CEOs, noted Applegate, chair of HBS’ Executive Education Portfolio for Business Owners & Entrepreneurs. With another of the panelists, Janet Kraus, Applegate is working on a paper about female entrepreneurs who have had success raising venture capital.

One way for women to gain access to venture capital is by forging personal connections, said Kraus, the CEO of Peach, a startup that sells intimate apparel through a network of “stylists” who visit customers’ homes to ensure proper fittings.

“People invest in people they know … You will not raise money by putting a pitch in someone’s hand coldly,” said Kraus.

Also emphasizing the importance of networking was panelist Sheila Marcelo, who is CEO of Care.com, an online site for finding and managing family care.

“You need to try and make sure you surround yourself at every stage of the game with champions,” she said, citing the importance of having mentors. Marcelo, M.B.A. ’98, J.D. ’99, is currently advising several female-led companies.

Women also “have to be looking at billion-dollar opportunities,” advised Kraus, who has taught entrepreneurship at HBS. “If you want to go into venture capital or any kind of external money, you have to be setting your sights on something very large.”

Stevens said that achieving some early success can help a fledgling business.

“Data can start to really tell an amazing story,” she said. “If you are sitting on a great business that is starting to do that, and you are building those networks and connections, people will start to take notice.”

Another panelist, Marie Schwartz, lamented what she said is a “huge bias towards youth” on the part of venture capitalists.

“It seems like people are much more willing to give someone who is 25 a check than someone who has actually worked and has experience,” said Schwartz, M.B.A. ’85, who is founder and CEO of TeenLife Media, which provides extensive listings of out-of-school programs and activities for teenagers both on the Web and in publications.

The panelists spoke of the passion they feel for their businesses, and the personal experiences that helped inspire those convictions.

Marcelo was spurred to create her business by her difficulty finding child and elder care for her family while she was running a startup earlier in her career.

“It’s an economic imperative,” she said of providing quality care for children and the elderly. “It’s often assumed to be a women’s issue, and it’s not.”

Schwartz, a strong believer in the value of experiential learning, founded her company as an outgrowth of efforts to find summer activities for her teenage sons after they moved to Boston.

“I want TeenLife to be a household name and place that people can come to to help them raise successful teens,” she said.