David Bowie and me 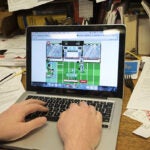 A playful turn for libraries

The death of trailblazing music and style icon David Bowie from cancer on Sunday prompted an outpouring of tributes from his contemporaries, including the Rolling Stones, Paul McCartney, Bruce Springsteen, and Elton John, and merited prominent coverage from major media outlets such as The BBC, The New York Times, and even L’Osservatore Romano, the Vatican newspaper.

Over a nearly 50-year recording career, the London-born Bowie, 69, garnered popular success and critical acclaim as a singer, musician, songwriter, theatrical composer, producer, fashion innovator, and actor. He was a creative visionary whose ever-changing stage personae and musical explorations often transcended cultural norms. His work synthesized avant-garde ideas drawn from music, dance, theater, art, and fashion in ways that could be deeply challenging and were not always understood or fully appreciated at the time.

As a showman, a style icon, a painter, and an actor, Bowie not only relentlessly pushed the limits of his own artistic expression, but that of other influential giants, including Brian Eno, Lou Reed, Philip Glass, and Iggy Pop. In the 1970s, his bold embrace of and experimentation with fluid notions of sexuality and gender identity served as a welcome lighthouse for many young people in the global LGBTQ community.

The Harvard Gazette spoke with scholars from across Harvard about the man, his music, his influence on them, and his lasting legacy.

James Wood
Professor of the practice of literary criticism, Faculty of Arts and Sciences

I loved Bowie’s work, and in many ways it defined my youth, as it did the upbringing of anyone who grew up in Britain in the 1970s and ’80s. I’m struck by how universally loved he was, despite his radicalism as an artist. (In Britain today, even the Archbishop of Canterbury lamented his passing). One of the reasons for that is that if you listen to those great songs of the ’70s like “Life on Mars” and “Space Oddity,” you can hear not only that he wrote really good tunes, but also that his chords have their roots in the old music hall and dance band harmonies that were also influential on Paul McCartney. Young kids still sing Bowie’s tunes, in the way they sing Beatles songs: They are a universal possession.

I mourn the loss of David Bowie. He was unmistakably an icon, but he was also a radical, liberating force who helped to fuel two generations of shifting cultural norms. When we talk about gender and sexuality as “performative” and “fluid,” when we think about identities as “social constructions,” we can look no further than David Bowie’s remarkable, boundary-blurring career for a master class on gender, sexuality, and cultural studies.

By chance, I landed in architecture school in 1972, just at the time Bowie dropped “Ziggy Stardust.” The sheer coincidence meant that design culture would, from the start, for our entire generation, be associated with identity construction and gender fluidity. Bowie designed identity in a way we have only recently fully understood. It was no coincidence, then, that later, in 1995, Bowie would sing:

Vijay Iyer
Franklin D. and Florence Rosenblatt Professor of the Arts, Faculty of Arts and Sciences

As with many great performers, David Bowie achieved a certain power through vulnerability. We felt it in the breaks of his voice, in his intuitive, fragmentary lyrics, in his unabashed androgyny, and his lifelong performative embrace of alterity. Bowie represented to generations of listeners an invitation to be fully, defiantly, flagrantly yourself, and to celebrate that quality in others. Jon Pareles stated it succinctly in The New York Times’ obituary for Bowie: “[H]is message was that there was always empathy beyond difference.”

David Bowie was one of the original transdisciplinary, genre- and gender-bending artist citizens. He was an exacting and fearless artistic daredevil. He was a limitless, timeless visionary — a storyteller and poet who lived beyond the confines of categories in service of his ideas. Long live the king.