Happy to be puzzled 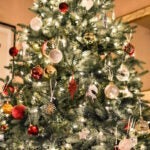 For many, a crossword puzzle is a solitary pleasure, one that blots out the world for a time, in some cases easing a harried commute. But for Gwen Urdang-Brown, crosswords have always been a family affair.

Decades after her father introduced her to the weekly ritual of The New York Times Sunday puzzle, crosswords remain a regular challenge and a bit of a mental refuge for Urdang-Brown, who has administered the Harvard English Department’s graduate program for 26 years.

Growing up in Providence, R.I., she would sit on the living room couch with her crossword-focused father. “He’d always try to let me guess first. One out of 20 times, I’d guess [right].”

By now Urdang-Brown has a family of her own, but the ties of childhood still bind.

Every week her mother mails her and her brother copies of the Times’ Sunday puzzle, a personal touch she could never match by getting a copy herself.

Urdang-Brown, who received a master’s degree from the Harvard Graduate School of Education in 1991, works the puzzle until she either completes it or, stumped, gives up. Then she circles the offending word — a marker to herself that she didn’t get it on her own — and looks up the answer.

“I’m a purist, I want to do it myself,” Urdang-Brown said. “I do save all the ones I’ve done, they’re my little trophies.”

A shared love of puzzles prompted Urdang-Brown and her husband, Harvard-trained chemist Jerry Brown, to publish their own crossword book in 2000. “Crossword Puzzles of the Century: 1900-1999” draws on cultural and world events to match 100 puzzles to 100 years.

Creating so many crosswords made the Sunday Times puzzle — which she does in ink, by the way — seem easy.

First the couple scoured books of facts, listing candidate words and phrases of different lengths. Sitting down with the lists and a blank grid, they went to work.

One recurrent issue was maintaining a balance between challenging and maddening.

“I’d been doing puzzles for so long, the clues were important to me. I wanted to make sure they were clear,” Urdang-Brown said. “I want people to succeed. … You can make them a little tricky, but not so difficult that people put them down.”

Compared with millennia-old games such as backgammon and checkers, crosswords are a relatively recent invention. The first appeared Dec. 21, 1913, when Arthur Wynne’s “word-cross” was published in The New York World newspaper. (Dec. 21 has since been designated as Crossword Puzzle Day.) The innovation started a craze that spread from daily to daily. One holdout? The New York Times, which resisted till 1942. (Dec. 21 has since been designated Crossword Puzzle Day.)

With the newspaper industry in flux, Urdang-Brown worries for the future of her Sunday tradition. Though she’s certain that crosswords will long have a place on the Web and in books, something would still be lost, she said.

“I do dread the day they stop doing the Sunday Times crossword. I like sitting there with pen and paper.”

And she hasn’t lost interest in creating puzzles of her own. Someday, inspiration will strike. When it does, she plans to aim high.

“My dream still is to one day have a puzzle published in The New York Times Sunday puzzle section. That would be glorious.”