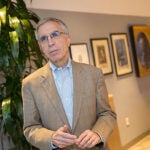 As the growth of hydraulic fracturing, or “fracking,” transforms more rural landscapes across the heartland into industrial zones, companies are less willing to disclose the chemicals they inject into the ground, Harvard researchers have found.

In the race to find new energy sources, fracking ― the process of extracting oil and gas from shale beds ― has emerged as a dominant, if controversial, force, bringing jobs and wealth to many communities but also spreading unease about its environmental impacts, notably water contamination. Companies drill into the Earth and inject at extreme pressure a mix of water, sand, and chemicals to fracture rock and release oil or gas.

To address public health concerns, 28 states require companies to report the chemicals they use for the process. Twenty-three of those states direct companies to disclose the information to the national registry FracFocus.

But the amount of information withheld has increased the past three years, according to a study by Kate Konschnik, a lecturer and director of Harvard Environmental Law Policy Initiative, and Archana Dayalu, a Ph.D. candidate in the Graduate School of Arts and Sciences’ Department of Earth and Planetary Sciences.

The reluctance of companies to disclose the chemicals used in fracking has contributed to debate around the practice. While the public can find out what chemicals are used at other industrial sites in their communities through an EPA registry, most of the online chemical information on fracking is available only through FracFocus, a resource the study indicates is incomplete and inaccurate.

The findings surprised the researchers because companies seemed to disclose more information when FracFocus was a voluntary initiative led by the Department of Energy.

“We had expected that, because more of the disclosures were being made in response to legal requirements, they’d be more complete,” said Konschnik.

The study is not an attack against fracking, the researchers said, but it should raise concerns.

“Fracking has helped put the United States on the trajectory towards energy independence,” said Dayalu. “But it doesn’t give the process a free pass against regulation.”

The study is the most comprehensive analysis to date of chemical disclosures registered on FracFocus. The researchers reviewed more than 96,000 disclosure forms, including nearly 2 million ingredient records. Among the cited ingredients were ammonium chloride, hydrochloric acid, and methanol, chemicals the Centers for Disease Control says can cause skin irritations, headaches, digestive disorders, lung damage and other health conditions.

Konschnik said FracFocus falls short of being a regulatory tool, and called for policy-makers to do more to ensure that citizens have access to complete and accurate chemical disclosures.

“We think states could signal to the oil and gas community that they take these disclosures seriously,” she said. “If companies don’t think regulators are taking this seriously, they won’t take the time and effort to make complete and correct disclosures.”

The study, “Hydraulic fracturing chemicals reporting: Analysis of available data and recommendations for policy makers,” was published this month in Energy Policy, an academic journal.

“A lot of oil and gas activity is happening close to cities, communities, and schools,” said Konschnik. “People are seeing this industrial activity right outside their door, they see trucks come up with chemicals, and that concerns them. They want to know what chemicals are being used in their communities. There is so much we don’t know about this activity.”