The pop in Corita Kent 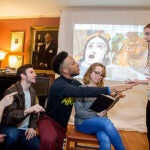 Life in a cabaret

Artist Corita Kent once more is front and center.

Boston Mayor Martin J. Walsh has proclaimed Friday, Nov. 20, Corita Kent Day in the city in recognition of the influential painter, educator, and nun who inspired thousands of people during the tumultuous decades of the 1960s and ’70s, and who gave Boston its own giant pop art icon.

Kent lived in Boston from 1968 until her death in 1986, and in 1971 she created the bold “Rainbow Swash” design for the Boston Gas (now National Grid) storage tank on the Dorchester waterfront. The proclamation falls on what would have been her 97th birthday and is a reminder of her impact and her legacy.

The Harvard Art Museums have staged an exhibition called “Corita Kent and the Language of Pop,” and have raised a probing question: Should Kent and her artwork be included in the pop art canon and among the works of her contemporaries Andy Warhol, Edward Ruscha, Roy Lichtenstein, and others?

Anyone interested in the artist’s life, legacy, and local impact can hear fascinating personal stories thanks to a partnership among StoryCorps, the Harvard Art Museums, and National Grid. In September, StoryCorps, the national oral history project, recorded more than 12 hours of stories over three days in its typical fashion — personal conversations between two friends or acquaintances.

StoryCorps and Corita Kent at the Harvard Art Museums

The Harvard Art Museums worked with the national oral history project StoryCorps and National Grid to record conversations about the artist Corita Kent in conjunction with the exhibition “Corita Kent and the Language of Pop.” This audio sampler pulls from conversations with Mary Anne Karia, John O’Connor, Harvey Cox, Susan Dackerman, and Molly Lanzarotta. Listen to the full segments at http://www.harvardartmuseums.org/tour/storycorps-and-corita-kent.

Five edited interviews are now available via a digital tour on the Harvard Art Museums’ website. They include a conversation with exhibition curator Susan Dackerman; memories of Kent by Mary Anne Karia, who assisted in Kent’s workshop at Immaculate Heart in California; a conversation between a father and daughter who lived in the shadow of Kent’s rainbow design on the gas tank; thoughts from Molly Lanzarotta, who grew up surrounded by Kent’s work in her family home; and stories from a friend of Kent who worked with her during the anti-war movement of the 1960s.

“Corita Kent and the Language of Pop” will be on view through Jan. 3.