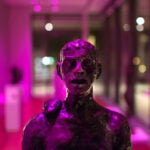 There’s a moment in the 1980 NBA Finals when the Philadelphia 76ers’ Julius Erving — Dr. J — does the impossible. While driving the ball to the net, he goes for the layup and stops time. Or time stops. Either way, Erving, suspended midair, changes direction, passes Kareem Abdul-Jabbar, goes behind the basket, reaches past it, scores.

It was a legendary move, and one that poet Ross Gay meditates on. “I really think about what it means to do an impossible thing,” said Gay, almost wistful.

Dr. J is an enduring hero for Gay, who is writing a long poem about the Hall of Famer as part of his fellowship year at Radcliffe. “But let’s not talk about it!” insisted Gay, waving the idea away, perhaps superstitious.

Gay is no stranger to sports. He has a broad smile that, even at age 41, retains the youthful exuberance of long days at play. At the moment, he has reason to be exuberant and superstitious: He’s a finalist for the National Book Award for his latest book of poems, “Catalog of Unabashed Gratitude.”

The idea that talking about something will keep it from fruition, or will somehow jinx it, isn’t exactly rare — except, it seems, in sports. When they’re not talking trash, athletes declare their greatness with a dance in the end zone or a leap down the court. But writers can be, sadly, a milder-mannered lot.

“I’m really, really excited by the list [of finalists],” said Gay. “The list is amazing. It’s already a win.”

And that’s all there is to know about that.

Growing up outside of Philadelphia, Gay lived in an apartment complex with his father, a restaurant manager, and mother, whose jobs included teacher and copy editor. His older brother became an English teacher and high school principal. Gay took a more meandering path.

As a student at Lafayette College, “I was on the brink of failing out,” said Gay. “I didn’t care about school. I was a football player, but football wasn’t going great, and I hadn’t found what was interesting to me yet.”

He’d declared a major in government and law, but all that changed when his 20th-century literature professor assigned him a project on the poet Amiri Baraka. “I hadn’t read a poem in earnest until then,” he said. “It totally changed my life — I started reading, I started writing.”

Whereas in football Gay could see the tangible results of his talent, poetry was at first more elusive. “Football remained very much at the center of my life despite all of my attempts to pretend that it wasn’t,” he said. But Gay did enroll in creative writing classes and started seriously considering graduate school. “I was talking to my professor Lee Upton, and I said, ‘I’m a bad writer, and I would love to study more,’ and I felt like I needed more relationships with writing instructors, so she recommended that I study at Sarah Lawrence College.”

He was waitlisted, but called the school “like 10,000 times,” and eventually got in. “I just knew that I was going to do this art thing in some way,” he said.

At Sarah Lawrence he studied with Marie Howe, Thomas Lux, and National Book Award winner Gerald Stern. He went on to earn a Ph.D. from Temple University and set off on a teaching career that took him to Lafayette, Montclair State University, and most recently, Indiana University in Bloomington, where he lives full-time. His latest collection is his third, after “Against Which” and “Bringing the Shovel Down.”

Gay rents a room in a North Cambridge apartment with another writer and an architecture student. He describes his days as a medley of running errands, exercise, and working — with intermittent spurts of watching basketball drills on YouTube.

During his Radcliffe residency, Gay will be thinking of Dr. J while also working on an adaptation of Virgil’s “Georgics” and what he calls “a lyric meditation on my relationship with the land, which is also an exploration of race and nation and the imagination.” Gay maintains an elaborate garden in Bloomington full of apples, peaches, pears, plums, medlars, jujubes, serviceberries, figs, rhubarb, greens, garlic, and potatoes. “It’s a little too dense,” he said with a laugh.

The same might be said of “Catalog of Unabashed Gratitude,” but in the best way possible. The book as a cohesive collection reflects the expansive imagination behind it. Gay set out to write a poem of the same name — what became a 25-page behemoth of both wrenching and joyful thanksgiving — before deciding that “a book called ‘Catalog of Unabashed Gratitude’ would be a great book to have in the world.”

The poems are exultant yet elegiac, funny but heartbreaking. They have simple titles like “feet,” which begins with an admission that the speaker’s feet are ugly. The poem upends itself when the same feet are complimented by someone named Tina, now dead. Gay writes: “why else would I try sadly to make music of her unremarkable kindness? / I am trying, I think, to forgive myself / for something I don’t know what.”

For Gay, poetry has never eclipsed sports. He co-edits the online sports magazine Some Call it Ballin’ and still makes time for playing basketball. “There’s a profound lyric sense to being involved in a poem and being involved in the making or playing of a game … a kind of time dropping away, or dropping out of time when you’re in middle of either,” he said.

But when the National Book Award winners are announced on Wednesday, Gay will be in New York City with the other finalists. Maybe he can pull off the seemingly impossible. Maybe he already has.

Suggesting as much would be a jinx. Regardless of the outcome, said Gay, “I’ll go to work the next morning.”

Ross Gay will read from his work on Tuesday at 7 p.m. at The New School in New York. Watch it here. He will also give a talk at the Radcliffe Institute on Feb. 17 at 4 p.m.