Life in a cabaret 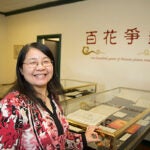 What good is sitting alone in your room? That’s fine if you’re studying, but otherwise you could be at the Harvard Cabaret, a collaboration by College undergrads and graduate students at the A.R.T. Institute that blends song, dance, mischief, and monologue and that organizers hope will become an annual tradition.

At this increasingly stress-filled time of year, it’s also a chance to relax and blow off steam. The cabaret’s various performances, including scenes from established plays as well as original compositions, songs, and dance numbers, all have been organized around the theme of stress.

“We figured that’s something that everyone in the Harvard community can relate to,” said sophomore Sam Hagen, a Theater, Dance & Media concentrator who conceived of the show along with A.R.T. Institute student Aida Rocci Ruiz.

The two, who met last summer while working at the American Repertory Theater, discussed the idea one day over coffee. Two hours later, they decided “we are going to make this happen,” said Rocci Ruiz. They brought the idea to the institute’s administrative director, Julia Smeliansky, who backed their plan. Then they got to work, sending out a call for proposals from students, finding a performance space, partnering graduates with undergrads on different pieces, and letting the collaborations and the creativity begin. The cabaret includes eight numbers and 30 performers.

“We wanted them to collaborate to realize that they can depend on each other’s talents,” said Rocci Ruiz.

The cabaret builds on the spirit engendered by the new Theater, Dance & Media concentration, said David Chambers, a longtime professor of directing at the Yale University School of Drama and a visiting Harvard professor who is consulting on the show.

“The new concentration and the American Repertory Theater are a major breakthrough for Harvard, and I think it has opened the floodgates. … An idea like this, which was immediately picked up by Julia at the A.R.T. Institute, I think has to do with the new climate.”

Chambers is well versed in the Yale Cabaret, a playground for subversion and artistic expression now in its 48th year, with alumni such as Henry Winkler, Sigourney Weaver, and Meryl Streep.

“[Cabaret] implies a certain kind of freedom, a challenge to the status quo,” said Chambers. “It’s filled with risk, and that’s why people keep coming back.”

With luck, the Harvard Cabaret will keep coming back, too.

The Harvard Cabaret plays tonight at 7 and 9:30 at the Signet Society, 46 Dunster St.