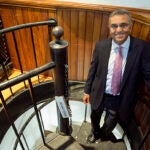 Two new studies from the Harvard T.H. Chan School of Public Health shed light on critical dietary issues facing Americans. One study showed that while recent improvements in the U.S. diet have helped reduce disease and premature death, the overall American diet is still poor. Another, which analyzed interventions to reduce childhood obesity, found three interventions that would save more in health care costs than they would cost to implement.

Both studies were published today (Nov. 2) in Health Affairs.

Steady improvement, but a long way to go

In the U.S. diet study, researchers analyzed how changes in dietary quality from 1999 to 2012 impacted disease and premature death. They examined dietary quality among 33,885 U.S. adults who participated in the National Health and Nutrition Examination Survey, using a measure called the Alternate Healthy Eating Index 2010. To see how this dietary quality would impact disease and mortality, they used information from two long-running studies, the Nurses’ Health Study and the Health Professionals Follow-Up Study, involving roughly 173,000 people.

Notably, the researchers found that it took only small improvements in dietary quality to substantially reduce disease burden, which is a measure of both fatal and nonfatal loss of health due to disease.

Despite steady improvement, however, the authors said that overall dietary quality in the U.S. is far from optimal. They found that the study participants’ average healthy eating score — on a scale ranging from 0 to 110, with 110 being the healthiest — never reached 50.

In addition, disparities across different socioeconomic groups actually increased during the study period. African-Americans had the poorest dietary quality, and this finding was accounted for by differences in income and education. The researchers also found that, except for significant reductions in trans fat and sugar-sweetened beverages, most key components of healthful diets showed only modest or no improvements.

Noting that the drop in trans fat intake was driven largely by regulatory actions, such as the FDA’s recent ban on its use, the authors suggested that additional policies — such as expanding taxation on sugary beverages or mandating less salt in food — could help maintain and accelerate improvements in the national diet.

“Our findings provide further justification for promoting healthful diets as a national priority for chronic disease prevention, as well as for legislative and regulatory actions to improve the food supply more broadly,” said Dong Wang, a doctoral candidate in the departments of Nutrition and Epidemiology at Harvard Chan School and lead author of the study.

In another Harvard Chan School study, researchers analyzed the cost-effectiveness of interventions for reducing childhood obesity in the U.S.

This study, led by Steven Gortmaker, professor of the practice of health sociology, found three interventions that would more than pay for themselves by reducing health care costs related to obesity: an excise tax on sugar-sweetened beverages; elimination of the tax subsidy for advertising unhealthy food to children; and nutrition standards for food and drinks sold in schools outside of school meals, such as those found in the current Smart Snacks in School federal regulation.

This is the first study of its kind to estimate the cost-effectiveness of such a wide variety of nutrition interventions that are high on the obesity policy agenda — documenting their potential reach, comparative effectiveness, implementation cost, and cost-effectiveness.

In their analysis, which looked at the U.S. population over the 10-year period from 2015 to 2025, researchers reviewed existing evidence and developed a detailed prediction model to calculate the costs and effectiveness of the interventions through their impact on body mass index, obesity prevalence, and obesity-related health care costs.

Noting that “the United States will not be able to treat its way out of the obesity epidemic,” the authors wrote that policymakers should focus on implementing cost-effective preventive interventions with broad population reach. The study’s results emphasize the importance of ongoing implementation of recent reforms to the school food environment included in both the Smart Snacks in School regulation and in improvements to school meal programs under the Healthy, Hunger-Free Kids Act of 2010.

“Our results highlight the importance of investing in prevention for policymakers aiming to reduce childhood obesity,” said Gortmaker. “Interventions early in the life course have the best chance of reducing long-term obesity prevalence and related mortality and health care costs.”