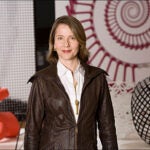 What does architecture have to do with fashion? If you’re designer Calvin Klein, actually quite a lot.

Speaking before an overflow crowd at Gund Hall Monday evening as part of the Rouse Visiting Artist Program at Harvard Graduate School of Design (GSD), Klein discussed how form, setting, space, and light have deeply informed his work as a legendary fashion designer and cultural trailblazer for more than four decades.

One of the first American designers of women’s fashion to be embraced internationally, Klein started out in the late 1960s designing women’s coats. After winning a slew of fashion industry awards in the early to mid-1970s, he launched his own eponymous company and built a global empire that grew from haute couture to include men’s and women’s sportswear, a wildly successful fragrance line, cosmetics, and home furnishings. He famously put his name on two workaday items — jeans and men’s underwear — turning them into new product categories.

Presenting a distinct aesthetic that combined sleekly modern minimalism with fresh, youthful sensuality, Klein is perhaps known as much for the deliberately ambiguous sexuality of his often-provocative ad campaigns as for his clothing. Concerned that Madison Avenue wouldn’t fully understand his vision, Klein started his own in-house ad agency to do all of the company’s creative work and ad buying, a trailblazing move.

During his talk, hosted by Dean Mohsen Mostafavi, the Alexander and Victoria Wiley Professor of Design at GSD, Klein addressed his reputation as a rule-breaker, which began with an infamous 1980 commercial featuring Brooke Shields, then a teenage model and actress, suggestively cooing, “You know what comes between me and my Calvins? Nothing.”

The campaign was a shocker for its blatantly sexual undertone. But Klein brushed off the notion that it was inappropriate. “It said everything I wanted to say, which had to do with beauty, sexuality — and jeans. I could go on and on about denim!” he said, to much laughter.

“People used to ask me all the time, ‘Are you trying to create controversy?’” said Klein. “No. I was working with the most gifted, talented people in the world, and we pushed the envelope.”

Unlike many designers who license their names to unrelated companies, ceding quality control in exchange for hefty royalties, Klein said he always maintained near-obsessive oversight of his brand. He said he not only designed the products, but also chose the look and packaging of his merchandise, and even directed and edited the ad campaigns.

“Everything that had my name on it, from the day I started in 1968 until I sold my business in 2003, I was involved from the beginning, middle, and end with every product and every photograph and every model,” said Klein. He sometimes even appeared in his own ads. “I always wanted people to know that there is a designer behind all of these things that we were making.”

Architecture and setting have always been important to Klein’s artistic vision, he said. In what American Photographer magazine called one of the “10 pictures that changed America,” Bruce Weber shot an Olympic pole vaulter named Tom Hintnaus reclining against a white wall on the island of Santorini, Greece, to introduce Klein’s new line of men’s underwear in 1982. The image graced not only magazine pages, but was splashed on billboards, a bold departure for fashion advertising at the time.

“When we put Tom against this shape — and clearly the shape it’s architectural, it’s phallic, it’s absolutely gorgeous. The blue sky [is] amazing,” said Klein. “Had we photographed him against no scene, in a studio, it would be nothing.”

Asked if he had ever worried that the ad’s focus on the male body might not be well-received by a broad audience, Klein said, “I never worried. I can remember that shot like it was yesterday, and when we placed him against this architectural shape, I saw money in the bank.”

Despite the sexuality that’s interwoven in Klein’s work and the fashion industry’s emphasis on physical beauty, Klein rebuffed the suggestion that he contributes to the sexual objectification of women.

“I think of creating clothes to make people feel good and look good … that’s what we’re striving for. It’s not about objectifying anything. It’s really about trying to create something that can bring some value into someone’s life,” he said.

“The business got very big, it became a global business, and I was more involved than I cared to be in the management of the business,” he said. “I could spend the rest of my life in design rooms and working with design teams, but it got so big and overwhelming and I started thinking, you know, I’ve given my whole life to this work. There’s a whole world out there.”

Today, Klein spends much of his time traveling, speaking to groups, doing philanthropic work, and in recent years completing several renovations, demolitions, and construction to his 10-acre oceanfront estate in Southampton, N.Y.

On what was once the location of the summer home of industrialist Henry Francis du Pont, there now is an austere, mahogany-and-glass structure that Klein meticulously co-directed with several architects, including John Pawson and Michael Haverland, curating every piece of furniture and every tuft of sea grass. It’s that same deeply engaged approach with which Klein first made his name.

Calvin Klein speaks at the GSD

Bare, impossibly white walls and couches mix with stone antiquities, mid-century pieces by Le Corbusier and Jean Prouvé as well as Klein’s own custom-designed furniture. The house is almost too pristine and museum-like to imagine someone shambling around in a sandy bathing suit.

“When I get involved in a design project, I’m so focused on creating whatever it is we’re creating that I’m really not thinking about living in it,” he said.

Still, Klein confessed, initially it was difficult to walk away from the company he built and then watch others carry on without him.

“I had to come to the realization that I must let go because I’m no longer in control,” he said. “Letting go is tough, and it’s not just with work, it’s with anything in life. But if you can’t control it, what choice do you have? The only choice then is to be miserable — and that’s not something I want to be.”