Coffee with a cause 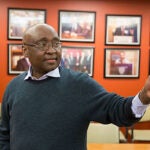 For growth, look to Africa

Inspired by his mother, student bears down to aid African farmers

Last November’s fundraising trip to the Bay Area failed, but Andy Agaba still sent his usual gift of African coffee to his hosts.

Which got him thinking.

Convincing investors to back his microfinance startup, Hiinga, was difficult. Many projects competed for the attention of potential investors in Hiinga’s brand of social entrepreneurship. Hiinga, started by Agaba and his wife, Sonya, in 2012, aimed to reach rural African farmers with loans that, though small, nonetheless had the potential to make a difference.

It was on the long plane ride back to Pennsylvania that Agaba began to think about coffee as a way to accomplish his goals.

“How can we create a business to create revenue to do what we want to do?” 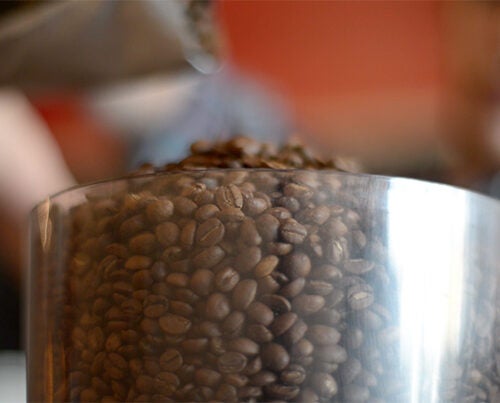 A year later, the result is Bantu Coffee, a social entrepreneurship startup Agaba is refining at Harvard’s i-lab.

Agaba, who holds the Gleitsman Leadership Fellowship at the Kennedy School’s Center for Public Leadership, is taking advantage of University resources to build on his idea, recruiting team members through connections fostered by the i-lab, working with Harvard Law School students to sort through issues that might arise in international trade law, and improving his own knowledge base both in and out of the classroom.

“I’m pretty determined and I think I know where I’m going,” Agaba said. “I need to learn how to get there, but that’s one of the reasons I’m here.”

Matthew Guidarelli, the i-lab’s assistant director for social and cultural impact and a member of the Gleitsman selection committee, said it was Agaba’s zeal that made him a good candidate for the fellowship.

“Andy stood out among that cohort for a couple of reasons,” Guidarelli said. “For me it was his unfeigned demeanor, his passion and genuineness and true care, not only for his family, but for the causes he’s trying to support. The passion and determination to see the success of these ventures — [and] of the people he’s trying to help — rang through.”

Agaba grew up poor in Bushenyi, a small town in western Uganda. His father was murdered two weeks before he was born, leaving his mother to raise five children alone.

She worked menial jobs to support her family, and then started selling tea and bread. She saved enough to buy two pigs, a male and female, making the beginning of a small farm. The farm yielded enough money to send Agaba and his siblings to secondary school, a dream his mother had been determined to make a reality.

Her example taught Agaba about dignity and self-reliance, and also illustrated for him the value of entrepreneurship.

Good grades at a local Catholic boys’ school helped Agaba earned a scholarship to Makerere University, in Kampala. After making it from the village to Uganda’s largest institution of higher learning, Agaba found himself asking: What was the point of going through so much poverty and pain? What is the purpose for my life?

That was when he joined his passion to help the poor with his interest in entrepreneurship and microfinance. A $35 loan, after all, had helped his mother start her first venture.

Agaba came to the United States to learn more about entrepreneurship and to build relationships that could broaden his future. His focus was on small businesspeople, like his mother, for whom a small amount can make a big difference.

His coffee project has grown from idea to budding reality. After discussing his vision with friends, Agaba returned to the Bay Area in March to launch Bantu, which sells specialty coffee beans to consumers as a way to finance African farmers. A yearlong subscription supports the planting of 52 coffee trees.

For farmers who already grow coffee, Agaba said, Bantu provides an additional market and offers instruction on how to grow a high-quality, organic product that might appeal to consumers of specialty coffee.

For those who don’t grow coffee, Bantu can provide the resources to plant new trees, introducing a cash crop that, according to Agaba, has been shown to double a family’s chances of pulling out of poverty.

Right now Bantu’s beans come from growers in Uganda, Kenya, Ethiopia, and South America, but Agaba said the goal is to increase the proportion of beans from farmers being helped by his enterprise. Given that newly planted coffee takes at least three years to begin bearing fruit, the process will take some time, he said.

Guidarelli said Bantu Coffee is among several socially conscious startups at the i-lab. The challenge for such endeavors is twofold, he pointed out: make money and fill a need.

It’s key, he said, that social enterprises work hard to ensure that what they do stands out, because the cause won’t be enough to draw consumers.

“That’s really hard to do,” Guidarelli said. “If they’re not able to produce a good product or service, no one’s going to care that you’re doing good for the world.”

It’s still early in the game for Bantu, and Agaba is still figuring out the best niche in an industry that Guidarelli described as “super-saturated.”

All the same, Guidarelli said, “it’s a beautiful thing to support these students as they make these passions and ideas become a reality.”