Radcliffe Fellow sheds light on the science of poetry 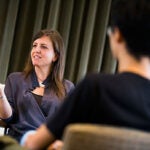 Chasing wonder to the finest detail

Combining the U.K.’s National Poetry Day, Oct. 8, with its yearlong theme of “light” could have easily set the stage for a tale of poetry and science, but Sarah Howe needed no such prompting.

Howe, a Hong Kong–born British poet, is currently the Frieda L. Miller Fellow at the Radcliffe Institute for Advanced Study. Inspired by her love of science and her exploration of the universe’s mysteries, Howe wrote a poem dedicated to Stephen Hawking.

After Hawking learned of Howe’s efforts, he invited her to read her draft to him. He then recorded a version via his voice processor, and later the British artist Bridget Smith combined the audio with images of graphite particles in motion.

Howe said seeing Hawking’s labor-intensive and time-consuming efforts to communicate has only intensified her appreciation of language:

“Watching up-close the painstaking process of cheek twitches and scrolling word-menus by which Hawking communicates — it took him a quarter of an hour to type a single sentence, which then boomed from the speaker into the quiet room — filled me with a sense of the preciousness of language.

“Even as he offered to read my poem for National Poetry Day, he was self-deprecating about the synthesized voice he says he now thinks in: It is not very musical. To the contrary, I tried to reassure him; it has a rhythm and harmonics all of its own. Listening to recording after recording, I’d tried to hear it in my mind as I wrote and re-wrote my lines. It was originally designed for a telephone directory, he added, with what I imagined was a chuckle.

“We’d shared a joke earlier about the strings of random words that flash up on his screen whenever the cheek-sensor picks up stray movements, when he’s eating, say, or looking round the room. He should publish a volume of experimental poems.”

When we wake up brushed by panic in the dark
our pupils grope for the shape of things we know.

that stripe a dimmed lab’s wall — particles no more ―
and with a wave bid all certainties goodbye.

For what’s sure in a universe that dopplers
away like a siren’s midnight cry? They say

bent in its tracks, can’t resist. If we can think
this far, might not our eyes adjust to the dark?

A presentation and poetry reading by Howe will be held on Oct. 28 in Radcliffe Yard. The event is free and open to the public.