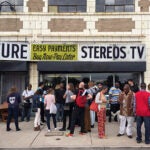 In 1848, an iron bar pierced his brain, his case providing new insights on both trauma and recovery

Imagine the modern-day reaction to a news story about a man surviving a three-foot, 7-inch, 13½-pound iron bar being blown through his skull — taking a chunk of his brain with it.

Then imagine that this happened in 1848, long before modern medicine and neuroscience. That was the case of Phineas Gage.

Whether the Vermont construction foreman, who was laying railroad track and using explosives at the time of the industrial accident, was lucky or unlucky is a judgment that Warren Anatomical Museum curator Dominic Hall puzzles over to this day.

“It is an impossible question, because he was extraordinarily unlucky to have an iron bar borne through his skull, but equally lucky to have survived, on such a low level of care,” said Hall. “We are lucky, to have him.”

Gage’s skull, along with the tamping iron that bore through it, are two of the approximately 15,000 artifacts and case objects conserved at the Warren, which is a part of the Center for the History of Medicine in Harvard’s Francis A. Countway Library of Medicine.

The resultant change in Gage’s personality — when he went from being well-liked and professionally successful to being “fitful, irreverent, and grossly profane, showing little deference for his fellows” and unable to keep his job — is widely cited in modern psychology as the textbook case for post-traumatic social disinhibition.

But as the years have gone by and we’ve learned more about his life, argued Hall, the teachings have changed.

“In 1848, he was seen as a triumph of human survival. Then, he becomes the textbook case for post-traumatic personality change. Recently, people interpret him as having found a form of independence and social recovery, which he didn’t get credit for 15 years ago.”

When Gage died 12 years after the accident, following epileptic seizures, his body was exhumed, while his skull and tamping iron were sent to the physician who had cared for him since the accident, John Harlow. Harlow later donated the items to the Warren, where they have remained for 160 years.

“In many ways, I see Gage similarly to how you would see a portrait of one of the famous professors hanging on the wall — he’s an important part of Harvard Medical School’s identity,” said Hall. “By continually reflecting on his case, it allows us to change how we reflect on the human brain and how we interact with our historical understanding of neuroscience.”