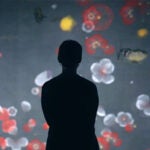 For gallery visitors, a chance to be one with the art

Through ear and taste, students connect with the ancients

Earlier this month, his class tapped his students’ senses again. During an afternoon demonstration and evening concert and reception, the undergrads assembled, tuned, and played replicas of the world’s oldest known instruments, and sampled food based on 4,000-year-old recipes.

To help students connect with ancient sounds, Barjamovic enlisted three experts in Mesopotamian music: Richard Dumbrill, cofounder of the International Conference of Near Eastern Archaeomusicology in London; Irving Finkel, assistant keeper of ancient Mesopotamian script at the British Museum; and Piotr Michalowski, a professor of Sumerology at the University of Michigan.

During the afternoon session, at the Northwest Science Center, as students took turns tinkering with a silver-coated nine-stringed harp shaped like a bull, a lyre made of wood and animal hide, and a pair of lute-like instruments, Finkel told them that music in ancient times — whether for religious or royal ceremonies or for simple enjoyment — “had the same power as it does in the modern world.”

Barjamovic, a lecturer on Assyriology, agreed, noting that the class demonstration with the replicas sent a clear message that “music is one of the baselines of human existence. There isn’t a culture on this planet that doesn’t have music, and here we have the chance to hear a piece of it over a distance of 3,500 years.”

“It shows us,” Barjamovic added, “that what brings us together as essentially human can sometimes bridge even the chasm of time that separates us.”

As she plucked out Beethoven’s “Ode to Joy” and a quick rendition of “Chopsticks” on the lyre, sophomore Emily Oliveira of Leverett House said connecting so directly to history was a powerful experience.

“It makes you consider that maybe some of these texts that we are reading aren’t so esoteric and they don’t describe something so distant from us on a very profound level. Getting to touch, albeit a replica, really makes me go beyond the textbook,” she said, “which is something I think we are all hoping for.”

During the evening session Dumbrill explained how the world’s earliest surviving compositions, from roughly 1,400 B.C., were noted on clay tablets in cuneiform in a type of mathematical formula. He also offered guests and students samples, based on the latest research, of what those early songs may have sounded like.

And as anyone knows, good music and good food often go hand in hand. At the reception at the Harvard Semitic Museum, students tried Babylonian fare prepared with help from author and ancient food expert Nawal Nasrallah and the Middle East Restaurant in Central Square.

The main course was a dish of dried apricots with black-eyed beans and lamb seasoned with turmeric, crushed coriander seeds, cinnamon, ginger, honey, and vinegar. The meal, explained Barjamovic, was popular in Assyria sometime around the first millennium B.C. and was slightly younger than the oldest menu item: mersu, a sweet made from dates, honey, roasted walnuts, pistachios, terebinth nuts, cumin, and coriander. Dating to the middle of the third millennium B.C., the dessert was typically served as an offering to the gods or as part of a festive occasion.

For students the culmination of the hands-on Harvard class was such an occasion indeed.