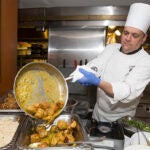 Founded in 2012 by a group of college and high school students, Karisma has raised $18,000 for various charities in the past. This year’s event shattered its records.

Karisma celebrates South Asian culture by bringing together bhangra, Indian classical dance, and other performance groups on the college and high school level. This year’s event, held in Krishna’s hometown of Long Island, N.Y., included performances by Wanted Ashiqz (featured on “So You Think You Can Dance”), Cornell Bhangra, Broadstreet Baadshahz (winners of the Bollywood America title), and Drexel Jhalak.

“Karisma started as a way to unite students through the means of the arts for a good cause,” said Krishna, who has been dancing since she was 6. “Dance, research, and children’s education have been my passions since high school.”