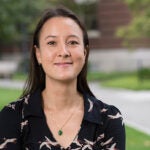 Radcliffe Fellow sheds light on the science of poetry

Celebrated novelist says the right has won the debate, but hope for peace remains

In David Grossman’s novel “To the End of the Land,” a Jewish mother named Ora flees to Galilee with a former lover in the hope of outrunning the bad news she’s certain is coming: that her son, an Israeli soldier, has been killed in the ongoing conflict with Palestinians.

To research the book, Grossman, then 50 years old, set off along the Sea of Galilee himself, hiking the Israel National Trail, eager to glean the details that would make the novel feel its most authentic. Already he knew too well his protagonist’s fear — Grossman’s son, Uri, had just enlisted with the Israeli Army. For a month while Grossman hiked, renting out rooms in villages when he needed to rest, he and Uri texted. It was a luxury Ora didn’t have.

But as an Israeli who had witnessed war and lived war, Grossman was writing about what he knew, “about people who try to live a normal life in abnormal situations.”

Two years passed. Grossman continued writing his book. Then in 2006, the Lebanese militia Hezbollah fired missiles into Israel. Grossman, a leftist peace activist and a celebrity in Israel, advocated publicly for a government-led ceasefire. It was a Thursday. By the following Monday, the ceasefire was in place. But two days before it, Grossman’s son, and his crew, had been killed. On Sunday Grossman answered the door to hear the news he could not outrun.

“This book, and my life collided,” he said.

Still, the urge to invent, to fantasize another life and characters, surprisingly, continued to grow.

“The book I was writing was the only solid place,” he said, “the only home that hadn’t been damaged.”

On the anniversary of the Arab-Israeli War, which started on Oct. 6, 1973, Grossman spoke at the 2015 Rita E. Hauser Forum for the Arts, sponsored by the Mahindra Humanities Center, to a packed audience at Radcliffe’s Knafel Center. In a talk titled “Facts of Life and Death,” the author conceded that for people living in the Middle East — certainly for Israelis and Palestinians — life and death are nearly synonymous.

Every day is a constant grappling with the consequences of what Grossman called “the great and tragic mistake that has entrapped us since 1967, since we became occupiers of other people.”

Compact and sober-faced, Grossman speaks with a slow Israeli lilt. Though critical of his country’s politics, he admits that even he is not immune to the way years upon years of war, murder, and terrorism can alter one’s psyche. He is an Army reservist.

Even for Israelis who believe in peace, “You are already programmed to regard war as the natural thing,” he said. “You are sure war is the deepest truth behind every human behavior. This is the most solid fact of life. This is the stuff reality is made of.”

In Hebrew, Israelis refer to the Israeli-Palestinian conflict and the Israeli condition as hamatzav, “the situation” in English. It’s a static term, noted Grossman, that can refer to stability — life — while serving as a euphemism for “a constant bleeding,” or death.

He insists this duality is intentionally disorienting. “It’s as if we are meant to live in this ‘situation’: to live by the sword, and to die by the sword, and to hope only to survive from one catastrophe to the next and to not believe that something more is possible,” he said. “And he or she who believes in peace or the dialogue between two groups is regarded as a dangerously naïve person, almost a traitor.”

This is especially true in the years since the 1993 Israeli-Palestinian peace accord. During the seven years when the agreement was most effective, Israelis dared to believe in a future, in normalcy, explained Grossman. When the fighting flared again in 2000, Grossman lamented that the last, desperate half-moon of hope was eclipsed. Israelis adopted a harder stance — no more promises, no more chances, he said.

“For that, I am sorry to say, the right wing in Israel has won. It managed to convey this worldview to most Israelis. It pushes Israel toward paralysis in its most critical point, where the most daring and creativity and flexibility are needed.”

Despite the tense normalcy, Grossman cannot imagine living anywhere but Israel, where hope is always apologetic, but despair is self-confident. But he remains cautiously optimistic, calling for a hope that doesn’t ignore the danger, he said, but refuses to see only danger.

“When I say all these harsh things, I stop myself and say, what am I talking about? I say, ‘Look how Israel is flourishing, how it is strong economically, militarily, how it remains a democracy in spite of everything.’ … I see all that, believe me. And yet. And yet.”