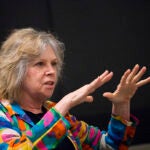 Art that lights the mind

Per-Olof Hasselgren already knew English when he arrived to the United States from Sweden 31 years ago, but in his stateside conversations, he couldn’t help but sense an owl in the moss.

Befuddled when someone remarked that something was “fishy,” Hasselgren didn’t yet grasp American slang and idiomatic expressions. “Something’s fishy” wouldn’t make much sense directly translated into Swedish, but Hasselgren eventually located its Swedish counterpart, that aforementioned head-scratching phrase involving feathered critters in a bog. (Another American expression, “to beat around the bush,” would mean to “walk like a cat around hot porridge” in Sweden.)

The George H. A. Clowes, Jr. Professor of Surgery at Harvard Medical School and surgeon at Beth Israel Deaconess Medical Center began keeping a log of these newfound turns of language as he discovered them, learning that quite a bit of American slang was based on anatomy and body parts, his specialty.

Though the surgeon spends most of his days focusing on endocrine organs, phrases like “foot in one’s mouth” and “tongue-tied” truly piqued his interest, along with the idea that expressions can be both funny and educational.

“When I have medical students and residents scrubbed in during my cases in the operating room, there are many opportunities to demonstrate and discuss anatomy,” he said. “I often make the point that anatomy matters. I usually also jokingly add, ‘You even need to know your anatomy to be able to speak and understand your language properly.’”

About four years ago, Hasselgren realized he had a project on his hands and began shopping around his compendium of expressions. That book, “Body Language — From Head to Toe,” contains more than 2,000 English idioms, words, and expressions related to anatomy.

Hasselgren also looked for body-related expressions in Swedish but concluded that more are found in English. “A lot are … butt-related,” he noticed. So many, in fact, that they warranted their own chapter that features expressions like butt out, butthead, butt of a joke, as well as some choice curse words. All are defined, as with any dictionary, and Hasselgren even demonstrates how to use each in a sentence (in case you don’t already know it like the back of your hand).

“I like to play with words, and most people pick up on it,” he said. “I often had to get up quite early before going to work to work on this book and then continue late evenings. It took some effort, but I had a lot of fun.”

He was, after all, just following his gut.