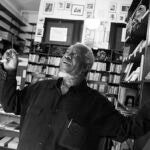 The distinguished German photojournalist Barbara Klemm will show her works this month in the Center for European Studies (CES) exhibit titled “West Meets East,” which commemorates the 25th anniversary of the reunification of Germany. Through her camera’s lens, and 45 years working with Frankfurter Allgemeine Zeitung, Klemm has captured eras of turbulent historical happenings and current affairs, and her iconic photographs have shaped the cultural memory of several generations of German citizens and captured nearly half a century of Germany’s history, including the period when the country was divided.

“East Meets West” opens Oct. 8 and kicks off with a 4:15 p.m. conversation between Klemm and Andrew W. Mellon Professor of Modern Art Benjamin H.D. Buchloh and Mary Elise Sarotte, Professor of International Relations and History and Dean’s Professor of History at the University of Southern California and a CES research associate.

The exhibit is being sponsored by the Minda de Gunzburg Center for European Studies; Goethe-Institut Boston; and Institute für Auslandsbeziehungen (Ifa).