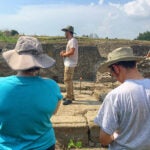 From cereal boxes to the Kardashians, everywhere we look we’re bombarded with messages about weight and bodies — how to look slimmer, how to be slimmer, how to stay slim.

How did America become so consumed with weight? Harvard anthropologist Susan Greenhalgh was inspired to delve deeper into this national obsession when her students began turning in essays documenting their struggles with body image and weight. Her new book, “Fat-Talk Nation: The Human Costs of America’s War on Fat,” is a compendium of those stories, as well as a research-based challenge to myths about weight.

GAZETTE: You got the idea for this book from your “The Woman and the Body” class. Can you tell me about that class and how the book came out of it?

GREENHALGH: “Fat-Talk Nation” was born on the campus of U.C.-Irvine, where I was teaching this course and decided to offer students extra credit for writing an essay on diet, weight, and the [body-mass index] in the life of someone they know well. Their essays left me stunned and saddened. So many were accounts of happy, carefree childhoods that were abruptly ended by a medical diagnosis of “overweight” or “obese,” or that came apart slowly as kids were badgered and bullied about their weight. And it was not just heavier kids who were suffering; people of every weight category, including underweight and normal, felt unhappy about their bodies and miserable about their lives.

The dominant narrative about weight in America stresses how high levels of obesity are harming the nation by worsening health, raising health care costs, and undermining economic productivity. The stories my students were telling — about the human harm done by the war on fat itself — are virtually unknown. The human costs of the nation’s fight against fat have not been tallied up or even acknowledged, and so remain invisible to the public and policymakers alike.

I wanted to write this book to make the voices of the targets of the war on fat, long shamed into silence, part of the public conversation about the obesity question. With 245 essays — gathered over two years — documenting the experiences of Californians of many ages, classes, and race/ethnicities, I had a rich body of material with which to document those costs and theorize the dynamics that produced them.

GAZETTE: When did the conversation on weight and obesity (“fat-talk”) really take off, and why and how is it so damaging?

GREENHALGH: Thin worship and fat hatred have been parts of American culture for over a century, but today’s epidemic of fat-talk — any communications about weight, from educational to abusive — took off after 2001, when the surgeon general issued a nationwide call to action for all sectors of society to fight fat. With the declaration of a public-health campaign, heaviness, long considered a moral and aesthetic transgression, was redefined as a disease, with profound consequences for individuals and society. What began as a public-health campaign quickly grew into a massive, society-wide war on fat that involves virtually every sector of American society and leaves few domains of life untouched.

Fat-talk is so damaging because it equates thinness not just with “health,” but also with civic virtue and deservingness to belong to the community of valued Americans. Though we have limited control over our weight, fat-talk calls on every American to be a thin, fit “biocitizen,” and awards cultural status and social citizenship only to those who can achieve the thin, fit body.

“Fat-Talk Nation” documents the deep damage caused by the ubiquitous fat-talk in the absence of effective means available to most people to lose weight. It shows that the war on fat has produced a generation of young people who are obsessed with their bodies and whose most fundamental sense of self comes from their size. Despite often desperate efforts, almost no one was able to lose weight and keep it off. Despite good intentions, current efforts to rescue America from obesity-induced national decline have been damaging the bodily and emotional health of young people and disrupting families and intimate relationships.

GAZETTE: The narratives in your book are mostly by women. Are women most at risk in the war on obesity? Why or why not?

GREENHALGH: Though the war on fat expects boys as well as girls to become fit, trim biocitizens, girls are more deeply affected. Regardless of their achievements in education, sports, and other domains, because their worth is still tied to their appearance, girls subject to fat abuse invariably took on a “fat girl” identity and felt bad about themselves as persons. Although boys were also subject to vicious fat abuse and suffered emotionally on account of it, because their worth is evaluated on the basis of their achievements, boys were able to rise above the taunts and resist taking on the global identity of “fat boy.”

GAZETTE: How do we reframe the way we talk about weight and bodies? Why is it necessary?

GREENHALGH: Our country’s high levels of obesity are a serious problem, but the way we’re approaching it is not working to reduce obesity in adults or prevent it in children. Moreover, it is doing real, measurable damage to ourselves, our psyches, our relationships, our families, and especially our young people.

A concern for social suffering and social justice argues for ending the society-wide war on fat, while continuing the search for scientific understanding of obesity’s causes and consequences. As part of that larger project, we need to both reframe the way we talk about obesity or fatness, and change how we approach it as a public-health issue. Among other things, we should tell the public the truth about the “biomyths” — partial truths about weight and health that everyone believes but have little scientific credence. Each of us should listen to our own fat-talk and work with others to create fat-talk-free zones where human value is not attached to body weight. Finally, we should launch a nationwide campaign against fat bullying that makes blatant weightism or sizeism just as intolerable as racism, sexism, and homophobia.