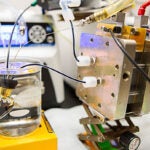 Chinese President Xi Jinping announced a new commitment on Friday to adopt a cap-and-trade plan to cut carbon emissions. The move by the world’s second-largest economy is one the United States has so far resisted.

The agreement, effective in 2017, came as Xi sat down with President Obama in Washington for policy discussions two months before a scheduled Paris conference designed to hammer out a new international agreement against climate change.

Michael McElroy, the Gilbert Butler Professor of Environmental Studies and chair of the Harvard China Project, has studied the country’s energy and environmental issues and has met with its leaders to discuss clean-air measures. The nation of 1.3 billion has had problems reducing its large quantities of climate-warming carbon dioxide. In addition, the particulates released from coal-burning power plants and auto tailpipes have intensified pollution.

The Gazette asked McElroy about Chinese’s new climate commitment, about how it might affect the Paris talks, and about whether that agreement might make U.S. officials more open to a national plan to curb carbon emissions.

GAZETTE: How important is the cap-and-trade plan that China announced Friday?

McELROY: It’s certainly a headline issue. Making this announcement on a visit to Washington is a big deal. The Chinese had a number of trial cap-and-trade systems; seven of them in fact. This is a national cap-and-trade system. It’s my understanding that it doesn’t apply to the transportation sector, it applies mostly to stationary sources: the power sector, iron and steel, cement, and so on. They’re the easiest ones to deal with, and are also what the Europeans have focused on.

The ideal cap-and-trade system would be one in which the government defines the total emissions of carbon that are permitted and auctions off rights to those emissions. That would then set a market price on what the emissions are going to cost and allows individual sources to trade — either sell permits when they have made investments that cut their emissions more than they expected, or buy from another organization. That’s the ideal system, but we’re a long way from having that.

The way this is really going, in Europe, in the U.S., and in China, is that individual sectors are allocated an emission quota. Let’s take the power sector. You have lots and lots of CO2 producing plants, so you have to allocate the permits to individual plants and then allow trading to take place. How do you do that? There certainly is great opportunity for preference to be given to particular plants or particular regions. Politics can play a big role. But in principle, if you’ve allocated the permits fairly, the trading can provide economic incentives for plants to reduce their emissions.

GAZETTE: Is this a fulfillment of the agreement that was previously made between the U.S. and China? Is it an add-on to that agreement? How does this fit into it?

McELROY: I think this is new. In the November statement between the two presidents, both expressed their commitment to reducing emissions according to different schedules. And that was hailed as a very big deal, and it was a very big deal. It meant that for the first time, the Chinese government was making a specific statement about what they were going to do in the future, including getting to the point where their emissions were going to peak in — what, 2025 or sooner? — and more than 20 percent of their primary energy would come from non-carbon sources.

And President Obama made a commitment to reduce U.S. emissions by a significant amount by 2025, relative to 2005. He talked also about a more aggressive commitment by 2050. That was a big deal because it addressed a lot of the opposition to dealing with the issue in the United States. People on the right have frequently made comments along the line of, “Why should we do anything because the Chinese are the big polluter and they’re not going to do anything?” This agreement made the statement that the Chinese, in fact, were going to do something, and that was pretty impressive.

So I think that the announcement today is significant.

GAZETTE: What impact do you see it having on the coming Paris talks?

McELROY: The idea that the world’s largest emitter and second-largest economy is prepared, by 2017, to move toward putting a price on carbon, that is a big deal.

GAZETTE: And might that influence other nations at these talks to do something similar?

McELROY: I haven’t had a chance to study the press release in detail, but there’s another issue: the plan for developed countries to essentially invest in carbon-saving activities in developing countries.

I think, aspirationally, the idea was that up to $100 billion would be made available by 2020. In association with this meeting today, I think that Xi actually made a Chinese commitment of close to $3 billion for this same function. China is not putting its commitment into that same commitment by developed countries. It plans to do it on its own, through bilateral agreements with individual countries.

GAZETTE: Might this increase the likelihood of broad U.S. action on cap and trade, and have the Chinese taken the moral and practical high ground on this issue?

McELROY: To some extent, both are true. The situation here is, obviously, that the ability of the administration to act is limited by politics — the right’s opposition to climate change and actions to deal with it. We’ve always known the Obama administration is committed to trying to do this. They’re trying to do it under the Clean Air Act, with the Supreme Court ratifying that CO2 is a pollutant. But this is very difficult [in the U.S.], and I think it is probably easier for China to live up to its commitment. In the United States, we still have this argument about whether it’s a serious issue or not, not based on facts but based on rhetoric and based on prejudice. They say it’s not an issue or … talk about whether this is just a natural fluctuation. They talk about whether the sun is responsible for the recent warming. It goes on and on and on. But the scientific evidence is compelling.

The positive thing, in my opinion, is that individual states and individual cities are making commitments. They had this very interesting meeting last week in Los Angeles with mayors and state organizations, including the Chinese side. A number of U.S. cities made very specific commitments. A typical commitment was to reduce emissions by 80 percent by 2050. Los Angeles  — even Houston  — was involved in making such a commitment. California, aggressively so, and Massachusetts.

GAZETTE: So states are maybe bypassing the intransigence?

GAZETTE: I know the China Project has made a variety of policy recommendations for China. Did you have any influence on Friday’s announcement?

McELROY: I would hope that the work that we’re doing with Chinese partners is consequential. We had the opportunity to spend an hour briefing the former premier, Wen Jiabao, on the work that we’re doing. What we’re trying to do is come up with creative ways in which energy can be used more effectively in China while reducing the emissions of CO2. We’ve done a lot of work to define what are the real opportunities of wind power, solar power, hydropower, nuclear power, and what are the problems in implementing it.

We have published papers that show, for example, that China’s wind potential would be enough to meet its entire energy commitment if it could be usefully deployed. But we’ve also highlighted the fact that there are difficulties in doing that, one of which is that the wind doesn’t blow all the time.

Another difficulty that we addressed is in northern China in winter. China has a very significant investment in wind farms, but when the wind is really blowing on cold winter days, often those wind farms are idle. They’re idle because the requirement to heat homes is being met largely by hot water. And the hot water is produced by coal-fired power plants that are also producing electricity. So if you need hot water, you can’t turn off the electricity that would be generated in the process. So the demand for electricity is being met to a large extent by these coal-fired heat and power plants, and you can’t use the electricity from the wind farms. We have been doing serious work to see how you can resolve that issue, and we have some good ideas of how to do that.

In that sense, we’re working to try to provide the kind of expertise that will allow smart decisions on the Chinese side that will reduce the emissions.

GAZETTE: People have said in the past that the climate change issue really can’t be resolved without China. Is this the kind of step that may have significant impact in the skies over the coming decades?

McELROY: I have a book on climate and energy in press at the moment. What I tried to do in that book is, while talking about the whole global energy issue and the whole global climate issue, to point out that if the U.S. and China were able to seriously cut back on emissions, that would take us more than halfway toward solving the problem.

The U.S. and China are responsible for more than 50 percent of the emissions. The theme of a lot of the work we’ve been doing in the China Project is to try to understand what options really exist. Our current target is to develop a strategy by which China effectively de-carbonizes its energy economy by 2050. That’s our prime scientific goal, doing that with our own people and in combination with colleagues on the Chinese side.

GAZETTE: Do you feel more hopeful today than you might have yesterday that climate change is a solvable problem?

McELROY: Yes, I do. I think that the issues raised by the pope for example, on his visit cast this in a very interesting moral framework. Then, having President Xi immediately come along and have this joint announcement from the White House is very significant. And what happened last week in Los Angeles with localities and mayors coming together from both the Chinese side and the U.S. side, that’s a really big deal.