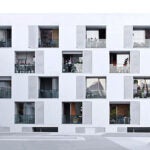 Housing that reflects the world

By the end of “Ghost Quartet,” Dave Malloy claims to answer whether or not he really believes in ghosts.

His supernatural off-Broadway musical, set for a short Oberon run, interrogates the human fascination with life after death. Why do we want to believe? It’s a question that got stuck in Malloy’s head as a Cleveland kid haunted by Stephen King and “The Twilight Zone,” first confronting death and its myriad mysteries.

Though his productions have always strayed left of center — the Obie award-winning “Three Pianos,” a drunken romp through Schubert’s “Winterreise,” and his acclaimed “Natasha, Pierre & The Great Comet of 1812” — “Ghost Quartet” is perhaps Malloy’s most idiosyncratic and personal work, an homage to the things that scared him as a boy.

“It was a great excuse to indulge in my childhood obsession with this genre,” said Malloy by phone from New York City, where he lives.

The music of “Ghost Quartet,” which Malloy wrote and also performs as a character in the show, is a nod to the soundtracks of his youth: “A theatrical interpretation of a concept album of love, death, and mystery — like Pink Floyd’s ‘The Wall.’”

Any Kind of Dead Person

The show also features an unusual prop — whiskey is readily available and shared with the audience. And you might need a drop, for the intensity alone. “Ghost Quartet” weaves four stories in a “deliberately vague and ambiguous way meant to invoke a mood,” said Malloy.

Long before acclaim on 2014 best-of lists by The New Yorker and The New York Times, the show was first imagined at a kitchen table, over a game of Risk played by Malloy and his troupe of actors and bandmates.

“I looked around the table and thought that I should be writing with these guys,” he said. “We’re all fantasy and sci-fi geeks.”

Malloy performs in most of his shows, typically out of necessity, he said — small shows, smaller budgets — although he thinks of himself as a band leader, “someone who writes and performs like someone in a band.”

The heart of rock ’n’ roll is in Cleveland, after all, and Malloy grew up on ’60s rock, becoming a “jazz snob” in high school, a “classical snob” in college, and then discovering “everything else” while working at a record store in San Francisco in his 20s.

These days, when not wandering through the park, “singing songs into an iPhone,” Malloy listens to a lot of hip-hop, as well as Balkan music. Every year, he wanders down to Brooklyn’s Zlatne Uste Golden Festival — two nights and 200 Balkan bands. “I get so inspired there,” he said.

“Ghost Quartet” is at Oberon from Sept. 9 through 12. For tickets and more information, visit the A.R.T. website.