It’s all about that bass 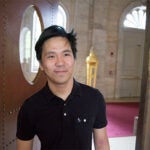 Anyone walking by the Harvard Ed Portal in Allston on a recent Friday may have heard shrieks, gasps, or screams of “ewwww!” from within. But not to worry; it was all in the name of science. Nearly two dozen local children were inside, learning how the body talks to the brain, in this case by experimenting with cockroaches.

Neuroscience research, the study of the body’s nervous system, is growing in importance as scientists and doctors try to cure devastating diseases such as Alzheimer’s and Parkinson’s. Getting kids interested in neuroscience helps that effort. What better way to do that than to show that science — particularly neuroscience — can be fun.

Cockroaches, the participants learned, have brains that are similar to those in humans, which make them perfect models for learning about neuroscience.

“Our bodies have nerves all over the place that help send signals to our brains,” said David Cox, assistant professor of molecular and cellular biology and of computer science at Harvard. “Today we’re going to see and hear those signals by using cockroach legs.”

Step two: Pin electrical conductors, or electrodes, to the legs. The students could attach smartphones to a SpikerBox, a device that allows viewing and hearing the neurons at work. A smartphone acts as the brain, and sends signals through the wires to the nerves in the leg. When music was played, the leg started to dance.

“Have you ever picked up your home phone before and listened in on a conversation? Well this is sort of like that. We’re listening in on the conversation that the cockroach’s nerves are having with its brain,” explained Cox.

When everything was hooked up, a series of pops could be heard amid the static. “Each pop was a nerve cell saying to the brain: ‘Hey, I’m here!’ It sort of sounds like a TV — well, a TV from back in the old days, at least — when certain channels wouldn’t come in,” Cox said.

The students, some of whom came to the event from the Charlesview Community Center, wasted no time playing anesthesiologist, surgeon, and electrical engineer.

Jade Diaz, 13, from Brighton, was one of the first to get her cockroach’s leg to move. “It was really interesting to watch it move to all different kinds of music,” she said. “And I even learned its leg has active nerves in it for up to two days!”

“This is the first time we’ve done these experiments with kids. We do it with Harvard undergrads every year — though the reactions aren’t quite the same,” said Cox, smiling. “It’s great to say to these kids: You’re the scientist now; you figure out what makes the legs move or not move. It’s fun to see them try to figure things out. We told them not to be afraid to make mistakes. Making mistakes is how you learn.”

Thirteen-year-old Clair Fu of Brighton said she came to the class because she wants to go to medical school someday, and thought this would be a great first step to seeing what neuroscience was all about.

“My favorite part was getting an idea of what different kinds of music make it dance,” she said. “We figured out that this little guy likes music with a lot — and I mean, a lot — of bass.” So much so that when Fu blasted Meghan Trainor’s song “All About That Bass,” the cockroach leg nearly jerked itself off the board. “They don’t really like the high frequencies,” she said.

At times the legs slowed down, and Cox explained that just like our legs sometimes get tired, the cockroach legs do too. If you give them a break and some time to rest, he said, and then play another song with a lot of beat, the legs will likely start dancing again.

At the end of the day, it seemed to the kids that Meghan Trainor had it right. It is all about that bass, no treble.