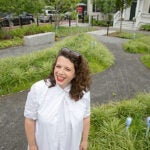 Maybe you couldn’t afford a vacation this summer, and the closest you’ll come to paradise is a glass of rosé and some dollar oysters on the waterfront. Fortunately, you can now tag along on other people’s jaunts, without the galling price tag — and minus the jetlag.

Summer Summits: Notes from further afield, a new initiative at the Carpenter Center, is bringing local art luminaries to Harvard for a travelogue of stories, relics, musings, and photographs from escapades near and far.

The brainchild of James Voorhies, the center’s new John R. and Barbara Robinson Family Director, the evening talks will feature voices in contemporary art from across Boston, including Eva Respini, the Barbara Lee Chief Curator at the Institute of Contemporary Art, and Pieranna Cavalchini, the Tom and Lisa Blumenthal Curator of Contemporary Art at the Isabella Stewart Gardner Museum.

“I thought it would be enjoyable to be together, learn about what they experienced this summer, have some drinks and snacks and simply hang out on the beautiful terrace of the Carpenter Center,” said Voorhies. “I’m excited for everyone to hear what caught their attention — in the arts or anything.”

Voorhies has already spent part of the summer in Berlin. Before classes resume, he’ll trek to Montreal, then Jackson Hole, Wyo. He was in Venice when the Gazette reached him, but will be back on campus for the first Summer Summit on July 22.

GAZETTE: What’s on your traveling soundtrack? Your reading list?

VOORHIES: I don’t listen to music when traveling. I feel comfortable listening to the sounds of foreign voices and unfamiliar places. I read emails. I also carry past issues of magazines and journals that have been put aside over the past months.

GAZETTE: How is travel essential to your creative life?

VOORHIES: I like to experience design, fashion, music, books, and architecture outside of the United States. I like to look at how other institutions install exhibitions and engage with their audiences. Travel introduces me to artists and exposes me to forms of curating that I don’t see in cities like New York and Los Angeles.

GAZETTE: When was the first time you ever left the United States? Where did you go?

VOORHIES: 1995. I went to Vienna with my boyfriend Nate and then around Europe, including Budapest, Berlin, Czech Republic, France, and more for about a year. Of course, the experience was thrilling and formative.

GAZETTE: Where’s your favorite destination and why?

VOORHIES: I enjoy Berlin. I appreciate the quiet voices and sounds of Berlin, the gracefulness and ease of moving through the city on bicycle and train, the gorgeous urban parks and thoughtful and intelligent attention to urban planning and architecture. I like ceramic cups with my coffee and the beautiful ways people project themselves into public space, the colors they wear. I also have many great friends in Berlin. It’s exciting to be there.

GAZETTE: Where do you want to travel next?

VOORHIES: I will visit Norway.

GAZETTE: What’s the weirdest thing that’s happened to you while traveling?