A Harvard homecoming for this artist 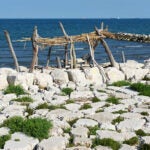 Jesse Aron Green ’02 is the first Harvard alumnus to have an exhibition at the new Harvard Art Museums. His project “Ärztliche Zimmergymnastik” uses a 19th-century manual for the instruction of calisthenics as a way to investigate the changing nature of masculinity, psychology, and aesthetics.

The centerpiece of the exhibition is a video installation in which 16 male performers complete a full set of the 45 movements laid out in the manual, written by German doctor Daniel Gottlob Moritz Schreber. A single camera captures these “medicalized indoor gymnastics” with an uninterrupted circular tracking shot. The other works in the exhibition — which include photographs, prints, and sculpture — connect the serial nature of the exercises to the sculpture of modern and contemporary artists such Sol LeWitt and Félix González-Torres.

Individual components of Green’s “Ärztliche Zimmergymnastik” have been shown at the Tate Modern in London and the Whitney Museum of American Art in New York, among other museums. But the Harvard Art Museums have acquired all the components, making this exhibition the first time the work is presented in its entirety.

“Ärztliche Zimmergymnastik” will be on view through Aug. 9. Exhibit curator John Hulsey will deliver lectures on July 30 and Aug. 6 from 12:30 to 1 p.m. at Harvard Art Museums. The lectures are limited to 15 people on a first-come, first-served basis with a paid admission.

A former Quincy House resident and a Needham native, Green spoke with the Art Museums about his Harvard education and the inspiration for his work.

Q: Tell me about your experience at Harvard — were you involved with art as an undergraduate?

GREEN: Most of what I did at Harvard revolved around making art in one form or another. I studied film, video, and studio art in the Department of Visual and Environmental Studies, directed theater with the Harvard-Radcliffe Dramatic Club, performed in the Modern Dance Company, served as an officer of the Signet Society, occasionally made drawings for the Lampoon, and took part in a number of projects sponsored by the Office for the Arts.

My academic focus was on film and video, but I found that my interests didn’t fit within the normal modes of fiction or documentary. I was drawn to making videos that utilized multiple screens or that might be installed in a theatrical environment. I was concurrently drawn to subject matter that took on big historical and political questions. I identify as a queer person and my family is Jewish, so I found that I made work about people who have been subjected to oppression, prejudice, or violence.

However, it’s only now that I’m able to talk clearly about all of this. At the time, I wasn’t the strongest student. I had a lot of trouble outside my concentration. For example, I took Professor Laurel Thatcher Ulrich’s class on feminism and history, but I didn’t do too well, despite my love for the material. Making art was the foothold I needed to invest personally in, and think independently about, how individuals find a place for themselves within a larger culture that might be hostile to their presence.

Q: What did you do after graduating?

GREEN: I attended UCLA, where I received my M.F.A. in an interdisciplinary program within the Department of Art. The program focused as much on the making of art as on the histories and theories of visual culture, feminism, psychoanalysis, and the philosophy of aesthetics.

While Harvard taught me how to think, UCLA gave me a specific language for examining my fields of interest. Now, eight years later, I can see the common thread between my graduate and undergraduate education: I’ve always wanted to work like a historian, but by making images and objects, not necessarily by writing or pursuing a career in academia.

Q: How did you arrive at the subject of “Ärztliche Zimmergynastik”?

GREEN: Most of the work I make is the solution to a problem I’ve given myself. “Ärztliche Zimmergymnastik” was my solution to the problem of graduate school.

When I made “Ärztliche Zimmergymnastik” as my master’s thesis in 2008, I was particularly interested in the political dimension of artwork from the late 1960s and early 1970s, especially minimalism. At the same time, I was reading about the advent of psychoanalysis and its relationship to the Holocaust. I came across “My Own Private Germany,” by historian Eric Santner, who mentions the exercise manual written by Dr. Schreber. Schreber’s son, Daniel Paul Schreber, suffered from schizophrenia and was known for his book “Memoirs of My Nervous Illness,” later analyzed by Freud. Santner describes the younger Schreber as suffering from a “crisis of investiture” — the result of a sense of powerlessness, both as someone who was abused as a child and as someone who identified with the marginal position of women and Jews. I was fascinated by this idea: that Schreber’s insanity was perhaps an ethical response to the power structures and politics of his time.

After reading Santner’s book, I marched over to the library and found two copies of Dr. Schreber’s text, one in German and a reprint in English. Both versions had these hilarious diagrams of a man in formal dress — waistcoat and tie! — exercising with a long wooden stick.

So, in a way, I arrived at “Ärztliche Zimmergymnastik” by burrowing into books.

Q: Did you have an “aha” moment while looking at the exercise manual?

GREEN: As soon as I opened the book, I could see the video in my mind — the deep space of the sound stage punctuated by a grid of low platforms, the group of men exercising with an uncanny sense of rigor, and the camera circulating around them with mechanized purposefulness, all in a subtle wash of white, brown, and gray. I had already been playing with a lot of similar ideas in my studio, but they all seemed to come together as I was standing there in the library.

Q: How does it feel to know your work has been added to the Harvard Art Museums collections?

GREEN: It’s humbling beyond any measure. I’ve lived in the area my entire life. As a Harvard alumnus and Boston native, it’s gratifying to know that my work has found a home here, too.

Jesse Aron Green ’02 shares further insights into his work in part two of this interview, which can be found on the Harvard Art Museums Index Magazine website