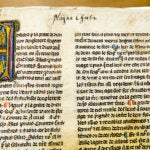 Minoo Emami’s artistic spin on the iconic painting “The Birth of Venus” is as much about the birth of terror as it is a nod to Botticelli’s sweeping romantic panorama.

In her own painting, Emami replaces the goddess with a prosthetic leg. The scallop shell upon which Venus is famously poised is instead a swath of fabric — perhaps a hijab, perhaps something else, but the implication is feminine, domestic. In the background, a shadowy figure with dark hair dons a gas mask as gold bullets punctuate the scene.

Emami’s paintings interrogate war and its lasting effects. For Emami, the conflict in question was the Iran-Iraq War of the ’80s, and the prosthesis is her ex-husband’s. At 18, Emami married a wounded soldier in the Tehran public hospital, and his injury sparked her creative venture, an attempt to document “his struggle for a decent and normal life,” she said.

“I never thought I would show these to anyone,” said Emami, now a student at the School of the Museum of Fine Arts, Boston. “They were just for me, just for us.”

The paintings also record what it means to be an Iranian woman and wife. In her large-scale works — “War Collection,” on view at the Center for Middle Eastern Studies through Aug. 18 — Emami pairs images of prostheses with familiar household items. While hosting a dinner party for her then husband and another veteran, she recollected that after a few drinks (“Yes, we do drink”), the men removed their prostheses and rested them against a wall. Emami was flustered as she moved from kitchen to salon, finding that their artificial limbs were in the way.

“They’re always a permanent subject, and a permanent presence in the life of the person who is an amputee,” she said.

Born into a Muslim family, Emami said she does not practice the faith. “I believe in democracy and liberalism,” she said. But in Iran, she said she is forbidden to talk about her anti-war stance, to create art, to have a voice.

Of her works now on their third public showing in the United States, she said, “I never had the chance to show these prostheses publicly in Iran. It’s a new pleasure for me here in the U.S.”

The subversive artist is a force to be reckoned with. In Iran, she has forged cloak-and-dagger collaborations with other women whose lives also have been altered by war. They meet in secret, creating papier–mâché dolls that live inside artificial feet, and decorating out-of-use prostheses “into eye-catching, spectacular art objects.”

Though the war is long over, Emami said more than 16 million undetected land mines remain in Iran, and their victims are typically children who are killed or maimed. The aftershocks of war, as her art testifies, are never-ending.

“This is our dark and sad reality,” said Emami. “But even with this dark and sad situation, life must go on.”

“War Collection” is on view now through Aug. 18 at the Center for Middle Eastern Studies.