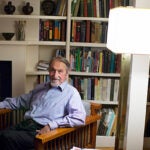 You might say that Jill Abramson has gone from pioneer to planter.

Just over a year ago, Abramson ’76, was at the apex of daily journalism, a veteran investigative reporter at The Wall Street Journal and The New York Times who rose to become The Times’ executive editor in 2011. She was the first woman to hold that lofty title in the paper’s 164-year history.

In May 2014, her departure from The Times because of her “management style” became one of the year’s biggest news industry stories and prompted fierce debate about women and power in the male-dominated workplace.

Bruised but still loving journalism, Abramson returned to Harvard last fall to teach a creative writing seminar in the English Department at the Faculty of Arts and Sciences, and perhaps to seed the next generation of press leaders. In her class, students developed the reporting and writing skills necessary to produce compelling nonfiction through close readings of great works from masters such as Gay Talese and important investigative reporting pieces. They also heard some straight talk from industry professionals, and of course, they wrote.

“I emphasized to them the importance of learning the basics of how to go out and witness and report accurately and then turn that reporting into a gripping story,” said Abramson. “Those skills are not easy to learn.”

Despite the contraction of the news industry that began in the early 2000s with the explosion of Craigslist, which siphoned off as much as $5 billion in lost classified advertising revenue from newspaper publishers, and the migration of paid subscribers to news outlets and aggregators offering free content on the Internet, Abramson said her students remain fascinated by how tough decisions get made in the newsroom and still see a bright future for themselves in the field.

“They haven’t been scared off at all. Many of these students are dying to become journalists, and having someone who can guide them about where the best programs are was very valuable to them,” she said.

With her enviable connections and experience, Abramson also offered students “very tactical advice” about how to find top-shelf first jobs and internships at print and digital media companies, a move that seems to be paying off as many students are going on to The Times, The Washington Post, and new-media outlets.

Abramson will teach the course again in the fall. She’s currently in the early stages of writing a book for Simon & Shuster about the news business’ digital future and developing an online publication dedicated to long-form reporting — “a startup that hasn’t started up yet” — with media entrepreneur Steven Brill.

Echoing Abramson’s love for the important but beleaguered craft of journalism, some of her students shared their reasons why they’re drawn to writing as a career and where they’ll be working.

“Journalism offers perks few other industries do, like an ability to contribute and innovate from day one, and connections to a community and the public good. But what ultimately made journalism irresistible for me was the opportunity to be creative and to be chiefly concerned with the truth. I don’t know many classmates who are entering jobs in which they get to create something original on a daily basis and share it with the world, or who get to learn about the facts of our world every day. Until another industry offers those opportunities, I will be a journalist.”

“The reason I’m going into journalism is that it is unambiguously my favorite thing to do. Writing, reporting, learning, informing, entertaining — it just gets me out of bed in the morning. In fact, sometimes it keeps me from going to bed at night, as I’m actually writing this note after having pulled an ‘all-nighter’ for Professor Abramson’s class. Like a surprising number of aspiring journalists, I do have a loving grandmother who wants nothing more than for me to work in consulting and finance and sends me emails to that effect frequently. I also have a loving mother who often reminds me that I can quickly switch careers should my journalism career prove unsuccessful. So I’ve heard the arguments against it numerous times, and I bet I could be earning more money elsewhere. But how could I work so hard for a few years and not follow my passion?”

“Although I certainly felt the pressure to pursue alternate career paths, I chose journalism for two reasons. First and foremost, I see writing as an essential part of my identity. I feel compelled to honor my passion for this craft in a professional setting, where my words can inspire and affect change. Secondly, I believe that journalism has the singular responsibility of informing the public, and in so doing shaping our national and international dialogue. Professor Abramson’s class has affirmed my belief that journalism is important work, since major events and conversations are nothing without the words to capture them.”

“I’ve always viewed writing as a jigsaw puzzle of sorts. It’s as if, when I’m writing, I hear a mental click when I’ve found the right sequence of words, with the goal that each adjective and punctuation mark adds a piece to the steadily forming picture. On the first day of our seminar, Professor Abramson lectured on what she viewed as the common characteristics of literature and journalism. She handed out copies of F. Scott Fitzgerald’s short story “Winter Dreams,” and we had an hour-long discussion in which we related Fitzgerald’s famous lyrical prose to the craft of “profile” reporting. How Fitzgerald framed his characters — the sharp observations, the subtle nuances of his description — and how he framed his narratives on a greater level mirrored the stylistic tendencies and structural choices of some of journalism’s greatest profile writers, including Gay Talese. As both an English concentrator and a journalist, I loved this intersection of novels and newspapers, this synthesis of reading and reporting.”

“I’m drawn to writing because I have ideas and I want people to engage with them and to enjoy doing so. Storytelling is the best way to get ideas out into the world, whether you tell that story in a persuasive, informational, literary, or comedic way. Journalism in particular teaches you to be investigative, truthful, and concise in your storytelling. It teaches you how to get people to actually care about something. I do comedy writing now because comedy allows you to talk about really tough issues in ways that get people to let their defenses down and just respond on a visceral level. It also requires a lot of those journalistic skills. There’s a reason many young people today get most of their news from shows like ‘The Daily Show’ and ‘Last Week Tonight.’ People just want a good story, one that makes them feel something. Good storytellers will always be in demand.”

“Over years of writing, from my high school newspaper to The Crimson and The New York Times, I’ve developed a special passion for long-form journalism. As publications evolve to fit the demands of the digital age, I am drawn to this field because I believe in the importance of uncovering and telling stories. After summers spent in journalism and book publishing, I’ve had up-close exposure to the challenges that writers and publications face as print moves online. There are financial hurdles, and new models of journalism must continue to develop. However, I am also entering the industry at a moment of new possibilities. As an English major with a special interest in statistics, I am excited about the emergence of data journalism, and am eager to take part as the genre grows and continues to define itself. It is not an easy time for the industry. Yet, while the form of journalism changes, its fundamentals cannot. Quality journalism preserves truth and creates our collective record, saying: We were here, and this is what really happened. It tells our stories, shaping the public’s consciousness and conscience. It creates accountability, serving as the glue of democracy. I want to work on the difficult problems associated with journalism today, like establishing new models to ensure that measurements of clicks and eyeballs do not limit the scope or quality of journalism.”