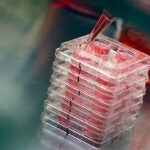 It was a festive setting as hundreds of members of the Harvard community gathered in the lower atrium of the Northwest Science Building Wednesday afternoon to celebrate the largest gift in the University’s 379-year history.

Earlier in the day, Harvard President Drew Faust announced in an email that Harvard Business School (HBS) alumnus, businessman, and philanthropist John A. Paulson, M.B.A ’80, made a gift of $400 million to support research, teaching, financial aid, and faculty development for Harvard’s School of Engineering and Applied Sciences (SEAS).

The gift builds on the momentum of Harvard’s $6.5 billion capital campaign, which had reached the $5 billion mark by the close of 2014.

Near a small dais, two crimson flags bearing the veritas shield were flanked by video monitors reflecting a name change to the School that will honor the transformative gift: the Harvard John A. Paulson School of Engineering and Applied Sciences.

“This is a special day for us all because it’s a day that will enable us to chart the future with bold confidence and enhanced ambitions,” said Faust during the program, which included remarks from Paulson as well as HBS Dean Nitin Nohria, Harvard Provost Alan M. Garber, and Michael D. Smith, Edgerley Family Dean of the Faculty of Arts and Sciences.

“This is a special day,” added Faust, “because it will provide Harvard’s newest School, less than a decade old, with the firm foundations we have strived to build as we have witnessed engineering grow so dramatically, expanding its presence and importance to students and faculty across the University and to the world beyond Harvard’s walls.

“John, there are no words adequate to thank you,” said Faust, “except to say that, on this special day, we can see into a future that you are making real for all of us and for so many others who will be beneficiaries of your stunning generosity.”

Smith called the gift “a landmark day for Harvard University,” and said the donation “will enable students and faculty from all Harvard Schools to harness the power of engineering and applied sciences to address the greatest challenges facing society.”

Paulson met with Faust at Massachusetts Hall in the morning, and later toured a number of SEAS labs and research facilities.

He said he chose to donate to SEAS after meeting with Faust and Nohria and realizing that “a major priority for Harvard was to establish the School of Engineering and Applied Sciences in Allston as the next center for technological innovation,” and he realized that supporting SEAS was an opportunity for his gift to have University-wide impact. Paulson said his gift would support research along with the rising number of Harvard students declaring engineering and computer sciences concentrations, through financial aid and scholarships, as well as through a growing faculty.

“The amount of the gift is large,” said Paulson. “But so are the University’s needs and ambitions for SEAS. To become a leading School in engineering and applied sciences, it is essential that SEAS have a substantial, unrestricted endowment.”

Paulson, who received three standing ovations during the session, said the donation was motivated in part by his own Harvard experience. The Business School offered him resources, opportunities, relationships, and wisdom, he said, and expected nothing in return. He went on to found Paulson & Co. in 1994 with $2 million and one employee. Today the company, which specializes in alternative investments, manages more than $19 billion and employs more than 125 people worldwide.

“There is no question that the support and education I received at Harvard was critical in helping me achieve success in my career. Now I feel it is important for me to do something impactful and meaningful for Harvard.”

Paulson said the donation would help to foster important connections and collaborations among the business, science, and engineering sectors and help to secure Harvard’s place as a leader in technological innovation.

The School’s previously announced expansion into Allston will place it at the center of an emerging research enterprise zone. It will be adjacent to HBS and the Harvard Innovation Lab, in an area designed to foster team-based innovation and deepen ties among students, faculty, and the business community.

Nohria spoke to those connections.

“The combination of business and technology has brought to the world remarkable, remarkable things. And this creates for Harvard Business School and for the School of Engineering and Applied Sciences a possibility to connect in ways that we have never been able to do before, that I think will be transformational, not just for each of our Schools, but for this University.”

The announcement came in tandem with news pointing toward SEAS’s emergence as an important incubator for the technology sector. On Tuesday, Harvard said three of four first-year projects supported by its Physical Sciences and Engineering Accelerator Fund, which launched in 2013 to help technology projects make it to market, are forming startups. Two of those projects were developed in labs based at SEAS.

The gift also helps to articulate Faust’s vision of “One Harvard,” said Nohria.

“This is a great example of what ‘One Harvard’ can bring. Because clearly what we each have in this University is the great joy of being a part of something that is uniquely great. But collectively, we can be so much better, and what this gift will enable is that collective possibility that Harvard represents.”

Garber also thanked Paulson for his transformative gift, suggesting that it reflected his financial savvy.

“By your generosity, you are validating this vision for this School in the University. You have proclaimed to the world: The smart money is on Harvard’s School of Engineering and Applied Sciences.”