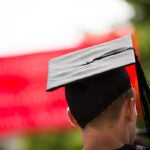 When Michael Mancinelli ’15 considered which college to attend, he wasn’t exactly thrilled with his options. Many N.C.A.A. Division 1 schools said they were interested in his services on the gridiron, but sounded less enthusiastic when Mancinelli made it clear that he also intended to pursue his interest in electrical engineering and astrophysics.

Discouraging right from the first phone calls, many schools were skeptical that such classroom demands could be met without cutting into desired hours in the weight room, on the practice field, watching training films, and traveling.

“A lot of coaches tend to think you can’t really devote all your energy to both,” Mancinelli said. “Basically, I thought I had to decide between playing football and getting the degree I wanted. But here, I was able to do both.”

Indeed. Mancinelli not only excelled on Harvard’s varsity football team, his last two seasons as starting left guard, he was Academic All-Ivy as an electrical engineering concentrator with a secondary in astrophysics. And he found time to spend with his longtime girlfriend, who attends Tufts University.

“You just have to get used to not having a lot of free time,” said Mancinelli. “I won’t lie. There have been very difficult times, times where it’s been a struggle to get everything done. I like to make lists, and I like to have a very structured calendar.”

Certainly, football provided Mancinelli with his strongest sense of community.

“With his size, beard, intellect, intensity, passion, and sense of humor, Mike is at times a force of nature, and it’s a beautiful thing,” said Timothy L. Murphy, the Thomas Stephenson Family Head Coach for Harvard Football, via email. He was “extremely popular and respected by his teammates and coaches, which is not always an easy thing to pull off.”

His Currier House suitemates are team members. Within the busy football hive, Mancinelli and his buddies on the team’s offensive line have had a welcome, memorable source of camaraderie.

“Obviously, all the wins that we’ve had and the Ivy League championships are things that I’ll remember forever. But it’s the little things like in the locker room and in the training room that really make it a positive experience,” he said.

A typically burly squad of between 15 and 20 players who practice together, the 6-foot-4-inch, 290-pound Mancinelli recalls the “O-line” having fun piling into the team’s overflowing hot tubs or going out for Viking-like dinners at an all-you-can-eat Brazilian steakhouse.

“The last time I went there with the whole O-line, we were there for like 3 ½, four hours,” he said. “We were the last people in the place, and it was like, ‘OK, we’ve gotta close now.’”

While it was a thrilling glimpse into what a high-level research career might hold, Mancinelli says he wants hands-on industry experience before heading to graduate school. Either way, he’s grateful for the doors that Harvard has helped open.

“At most D-1 programs, it’s pretty difficult to convince your coaches to let you go away for the summer without having that ruining your chances of playing,” said Mancinelli. “Everybody on the coaching staff has always supported my academic interests, and it’s been a refreshing thing that I know is definitely not the norm in collegiate sports anywhere.”

Looking ahead, Mancinelli will enjoy some rare time off before joining Ball Aerospace, which designs and builds satellites and radar technology for fighter jets. Ultimately, he’d like a career building hardware and software for collecting vital astrophysical data.

“I feel very fortunate that I found myself in this environment that allowed me to thrive in all my areas of interest, without compromise.”