The Harvard Campaign, two years in 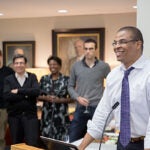 Going forward, a look back

As The Harvard Campaign approaches the close of its second year, Tamara Rogers ’74, vice president of alumni affairs and development, and Paul Finnegan ’75, M.B.A.’82, University treasurer and campaign co-chair, took a moment to reflect on its progress and early signs of its impact, in an interview with the Harvard Gazette.

GAZETTE: As the second year of The Harvard Campaign comes to a close, what are some trends you’ve noticed?

ROGERS: Since the last campaign, there’s much more cross-School activity. Eight of our Schools have campaign chairs who are not alumni of that particular School. We find that leadership and alumni alike are working more collaboratively to help each other achieve goals across Schools. That’s a positive culture shift, which makes Harvard more competitive in many ways, even beyond the campaign.

FINNEGAN: I have been struck by the level of engagement of alumni, both as volunteers, but also the number re-engaging through the Your Harvard events. We had one in Chicago, recently, and nearly 400 people attended. To see the level of interest is fantastic.

ROGERS: We’ve also seen an increase in participation by non-alumni who are simply drawn to the kind of global impact that Harvard has through our research and education. That has been a wonderful addition to the campaign.

GAZETTE: How has the campaign engaged alumni beyond financial contributions?

ROGERS: Paul mentioned the most recent Your Harvard event in Chicago. And to date we’ve hosted eight of these events around the world, with more than 3,000 attendees in total. It has been such a great opportunity for the alumni to hear from President [Drew] Faust and fascinating faculty, and to reconnect with each other and the University.

GAZETTE: What are some of the academic or research endeavors that the campaign has enabled?

ROGERS: To cite a couple, there’s an exciting new undergraduate teaching program in the Graduate School of Education, which will welcome its first cohort in September. And the Foundations of Human Behavior, a multi-disciplinary initiative studying behavioral science, received a very generous gift from Bill Ackman, allowing the University to hire faculty and also providing a research fund.

FINNEGAN: At the Graduate School of Design, the Center for Green Buildings and Cities is another initiative made possible by the campaign. The president’s Climate Change Solutions Fund also distributed its first seven grants this year.

GAZETTE: What physical changes to the campus does the campaign bring to mind?

FINNEGAN: I took “Fine Arts 13” as an undergraduate, and for me to walk into the new Harvard Art Museums was striking. It’s truly inspirational to see this magnificent space as so much more than just a museum. It’s a place for teaching and learning, and also a place for Harvard to interact with the community.

ROGERS: Perhaps the most recent example is happening at the Kennedy School, where they have just begun a significant expansion and renovation. Tata Hall at the Business School is magnificent. And right in the heart of the square, the Smith Campus Center represents Harvard’s first convening center for all members of the University community.

FINNEGAN: And I would encourage people, while they’re on campus this week, to walk through McKinlock Hall [Leverett House] or Stone Hall [Quincy House]. Both are magnificent examples of the benefits of House Renewal. I think the renewal project is going extremely well and it’s a great physical representation of campaign impact.

GAZETTE: What are your perceptions of the campaign to date?

ROGERS: We feel very good about where we are in the campaign. The numbers have been strong overall. We remain focused on where there are unmet needs. These include things such as undergraduate House renewal, the Allston science and engineering complex, and each School’s continuing needs in financial aid. We want to make sure we raise the right money for the right things and not think of progress solely in terms of the overall target.

FINNEGAN: This campaign is an opportunity for the alumni to support President Faust and her team in moving this University to the next level. They did a magnificent job recovering from the financial crisis, the institution is a lot stronger today, and now this is a chance for the president, the deans, and others to move us forward in some new and exciting directions.

ROGERS: As we think about all of the graduates together in Tercentenary Theatre for Commencement, there’s not a person at this gathering who has not been touched by philanthropy to the University, past and present. It is one of the truly inspiring legacies of Harvard over the centuries, and the campaign is part of that legacy.