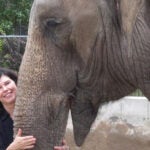 Departing University Librarian embraced and defended the digital, while still savoring the printed

As of June 30, the celebrated historian, digital library pioneer, and champion of books will leave the University he first saw as an undergraduate in 1957. A scholar of Enlightenment France and of the history of the book, he returned to Harvard in 1965 to join the Society of Fellows, decamped to Princeton University in 1968 for 39 years, and came back to Harvard in 2007.

A May 13 sendoff will celebrate Darnton ― a former Rhodes Scholar and MacArthur Fellow — as a champion of free, open-source access in a universe of stored knowledge threatened by commercial exploitation. “If I could characterize what I’ve done since 2007 in one word,” he said, “it would be ‘openness’ ― to open up Harvard to the world. Knowledge should be seen as a natural resource.”

In 2007, after arriving at the University as its chief librarian, Darnton joined in a polemic already underway, fighting an attempt by Google to digitize books at Harvard and elsewhere that were covered by copyright. At Harvard, by agreement, Google would go on to digitize about 850,000 books already in the public domain, but its attempt to digitize copyrighted books was eventually ruled a violation of antitrust law.

“The danger of commercialization is an ever-present danger,” said Darnton. “Google tried to create a commerce of access, [but in the end] could not put up a wall around our libraries and charge admission.”

As a counterpoint, he added, with the complications of copyright in mind, “We want to digitize everything and make everything free of charge.”

Darnton’s accomplishments are many. In 2008, he followed up on a vote by the Harvard Faculty of Arts and Sciences to make all scholarly articles available online, free of charge. He opened an Office for Scholarly Communication and started Digital Access to Scholarship at Harvard (DASH), an open-access repository of peer-reviewed literature. (Since then, all Harvard faculty have adopted the same policy.) “Articles reach more than 100 countries,” said Darnton of DASH and its audience, “far more than could ever be reached if published in just a journal.”

In 2010, he began what is likely the highlight and highest triumph of his passion for open access. During a gathering at Harvard, about 40 library scholars, experts, and others — drawn by a two-page proposal he had written — discussed how to harness the Internet to create a digital library that would “get our cultural heritage available to everyone” for free, said Darnton.

“It sounded extravagant and utopian,” he said. But the Boston-based Digital Public Library of America (DPLA) is two years old now. It links more than 1,200 U.S. libraries, archives, museums, and other repositories, and has made 10 million items available online. DPLA is already linked to analog outlets in Europe and Australia, said Darnton, and within five years will be part of a globe-spanning, knowledge-making “world digital library.”

That goal “was a dream of philosophers of the Enlightenment,” said Darnton. “We can do what Jefferson only dreamed of. We have the Internet, and he only had the printing press.”

In 2013 Darnton took another digital step, starting the Colonial North America project, an attempt to harness scattered collections in Massachusetts, New York, and Quebec to create a database of documents that explain some of the origins of the New World. Harvard alone has something like 400 million manuscript documents. A thematic database on such an unprecedented scale “will transform our knowledge of the origins of the country,” said Darnton. The documents at Harvard, by themselves, he said, illuminate “the beginning of America.”

The project bore fruit right away, with the discovery at Houghton Library of a 1767 Boston boycott petition containing more than 650 names that provided the first full snapshot of core activists — including many women — who a few years later sparked the American Revolution.

Books and bytes both

Darnton is just as at ease among the manuscripts and books of the past as he is in the brave new world of the Internet. Both are complementary means of knowledge dispersal, he said, and both are thriving.

“People ask me all the time: Is the book dead? Are libraries obsolete?” said Darnton. He says the answers are no and no. “More books are produced every year than ever before,” he said of the print trade. “One medium doesn’t displace another,” just as radio wasn’t killed by television, and as television didn’t succumb with the arrival of the Internet.

Darnton, whose academic accomplishments include reviving the history of the book as a scholarly pursuit, offered a startling example: Three centuries after Johannes Gutenberg invented the movable-type printing press, the manuscript was still a profit-making enterprise. (In some instances, the economics of scribal publishing trumped those of moveable type.)

“I see the ecology of the book expanding, getting richer, getting more diverse today,” said Darnton.

The business of electronic books is also evolving “to communicate information in new ways,” he said. In academics, dissertations are increasingly drawn away from a text-only model into a universe of video clips, audio, and digitized artifacts that expand the sense of a topic. “We are going through a period of transition,” said Darnton, “in which dissertations will be largely written on computers, stored in databases, and communicated through the Internet.”

At Harvard, the Graduate School of Arts and Sciences recognized this reality in 2010, opening a new secondary field to ease the way to multimedia Ph.D. dissertations. Two years before, a dissertation included vials of scent.

“The whole world is adjusting this way,” Darnton said of electronic publishing in all forms, “and the library has a huge role to play in it.”

So, like books, libraries are not dead or dying either, said Darnton. But for them to prosper requires advancing on two fronts, analog and digital. “We must acquire everything important in all fields of scholarship,” he said of printed books, along with “electronic outputs of all kinds, partly in cooperation with other libraries.”

The future of libraries will require “being connected, and cooperating on a very large scale” regarding acquisition, preservation, and storage, said Darnton. “I see a future in which financial problems can only be solved through different forms of cooperation.” As a template for such interaction, he cited a “carefully elaborated” memorandum of understanding signed by the Harvard Library and the Massachusetts Institute of Technology.

“The library still pumps intellectual energy into every corner of campus,” said Darnton. “I see the library as the heart and soul of Harvard. It has always been that. But that doesn’t mean it doesn’t change.”

An emerging ethic of free knowledge in an open-access digital world “does not mean anything goes,” said Darnton, with child pornography as an example of reasonable limits. (He is a trustee at the New York Public Library, which has a policy in place.) “At the same time, the public needs protection. We have to protect privacy” from assaults like large-scale personal data retrieval by the National Security Agency (“appalling,” said Darnton) and from nation-scale Internet censorship, as with what he calls “the Great Firewall of China.”

The First Amendment — though not a license to do or say everything — still needs protecting, said Darnton, because, without it, many people have “suffered terribly,” going back centuries. In his book “Censors at Work” (2014) Darnton presented a close-up, archival view of the damage such repression can do. His examples were Communist East Germany, British India under imperial rule, and Bourbon France, where “book police” carried out regular raids in search of “mauvais livres,” or bad books.

Bourbon France, after a fashion, is where Darnton will go when his time at Harvard ends.

“I have to vacate this office,” he said of his spacious room in Wadsworth House at the south edge of Harvard Yard. “But I won’t have to go to meetings. I won’t have to write memos. I’ll do history.”

Darnton has written or co-written 27 books, and his next will be a print rendition of work from his new website, robertdarnton.org. His first fully online publication is “a systematic compendium from a lot of sources,” said Darnton, a multi-layered, digitally assisted exploration of the world of books just before the French Revolution.

The site’s hundreds of documents and essays relate a complicated tale of foreign printers, clever smugglers (“the entire Enlightenment was printed outside of France”), busy censors, and avid readers. There is a core narrative, and then clickable layers beneath that, including dozens of letters from smugglers, for instance. “You can read vertically as well as horizontally,” said Darnton.

Studying book smugglers in Bourbon France was not among his early dreams. “For me, it was newspapers,” Darnton said. “My orientation from the very beginning was to be a newspaper reporter.”

His father, Byron Darnton, was killed in 1942 while covering the war in the Pacific for the New York Times, and emulation was his son’s first impulse. “I thought I would succeed my father,” said Harvard’s Darnton. “My brother did.”

While John Darnton did longtime work in newspapers, eventually winning a Pulitzer Prize, the elder brother beat him to the first byline: in the New York Times at age 4. During a tour of wartime Washington, D.C., a reporter friend of his father’s wrote up the boy’s baby-talk commentary, which required translating mispronunciations. Some are still apt, like “penny-gone” for “Pentagon.”

At Bedford (N.Y.) Junior High School, Robert Darnton wrote a regular column for the local newspaper. During college, he did “boot camp” at the Newark Star-Ledger, where among the “touching stories and complaints, you learn a lot.”

After Oxford, back in New York, Darnton spent a few months as a Times police reporter before signing on as a junior fellow with Harvard’s Society of Fellows. (Historian Arthur Schlesinger Jr., his undergraduate tutor, provided the recommendation.)

“The first thing I did as a junior fellow was to go into some key archives,” said Darnton, who still has on his desk shoeboxes full of file cards from his early research. (“These are antiques,” he offered. “Modern graduate students don’t have a clue about them.”) It was while sifting old manuscripts, letters, and books that he found — felt, really — his true calling: to be a kind of reporter who specializes in ages past, as a historian.

“It was the act of experiencing, of doing research, and writing it up as an attempt to make sense of the past that I found my vocation,” he said. “You make contact with people who have been dead for centuries, and get some sense of the tenor of their lives. I found that thrilling.”