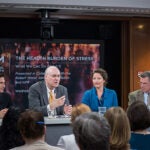 The mess left by stress

Harvard digital repository draws millions of readers, ranging from the academic community to the global public

Never heard of Svalbard and Jan Mayen? Join the club.

These Norse islands in the remote Arctic Ocean are among the few places in the world with no recorded downloads from Digital Access to Scholarship at Harvard (DASH), the free and open repository for peer-reviewed literature written by Harvard faculty.

With more than 20,000 items in storage, DASH is growing quickly. Since it started in 2009, the articles and dissertations in its repository have been downloaded more than 3.4 million times.

DASH shows the increasing attraction of digital access to information. In May, the number of downloads was twice the number of items loaned or renewed by Harvard’s libraries, said repository manager Colin Lukens. In the same month, he said, DASH downloads exceeded the number of requests made through HOLLIS, the open-to-all platform for Harvard Library system inquiries.

“The curve is up,” said Peter Suber, director of the Harvard’s Office for Scholarly Communication (OSC), which administers DASH. That curve will only continue to rise, he said, bringing more global exposure for faculty work to users inside and outside the academy.

“We’re sharing Harvard research with everybody with an Internet connection,” he said, “not just with the people lucky enough to be affiliated with libraries rich enough to subscribe to the journals in which those authors publish.”

Students of every stripe use DASH, as do teachers at community colleges, independent scholars, researchers from library-poor countries, medical patients, and legions of the merely curious. “Academics have underestimated the non-academic demand for their work,” said Suber, who is also director of the Harvard Open Access Project and a faculty fellow at the Berkman Center for Internet & Society.

When the National Institutes of Health (NIH) changed PubMed, its sourcing website for biomedical research citations, to open-access, the number of users “went up a hundredfold,” said Suber. “It shows the volume of unmet demand.” And when the NIH introduced PubMed Central, a full-text, open-access research portal, 40 percent of its users came from domains unrelated to schools.

Being able to download academic literature more easily creates a universe of happy users, whose voices are increasingly heard. In the last two years, DASH has allowed users to leave comments behind, and the OSC receives about five a day.

“Some of these stories are very moving,” said Suber. “Users are very grateful for this growing window of research.” Messages come in from primary schools, strapped American colleges, countries where printing a PDF means waiting in line, and researchers who have to negotiate political impediments to getting information. One Iranian student, who went to DASH to access an article she needed, wrote “Having open access … was a gift.”

Suber credited the Massachusetts Institute of Technology with the idea of soliciting user stories. “We take good ideas wherever we find them,” he said.

The variety of users, and the sheer volume of downloads from DASH, often take Harvard faculty by surprise. (They get monthly updates on the fate — and popularity — of their work once it goes into the repository.) “When they see the downloads they get per month, and when they see how many countries are downloading their work,” said Suber, “they’re astonished.”

Data is mapped on a macro scale on the DASH website. The darker the shade of green, the more downloads there have been in a country. The magnitude of downloads dispels an old myth still often embraced in the academy, he said: that scholars who publish in conventional journals behind pay walls, and who don’t make their articles open-access through repositories, are already reaching everyone they want to reach.

There is a growing appetite for peer-reviewed literature from academic researchers and general readers. “Most scholarly authors are not aware of this larger audience,” he said.

The idea of reaching that larger audience is attractive. “Scholars write journal articles for impact, not money,” said Suber. That’s been true since the mid-17th century, when the first academic journals appeared in London and in Paris, he said. “The custom grew up that scholars are not paid for their articles.” This puts scholars among the few creative professionals, like lawmakers and judges, who are not paid for what they write.

“Yet they’re eager to publish anyway,” said Suber. “They voluntarily — even eagerly — give away their work to publishers who do not buy it or pay royalties on it.” Academics get other rewards for their scholarship, such as tenure and peer recognition. They also get attention, which helps build academic careers.

The number of free, open digital repositories for scholarly work is growing rapidly, with an estimated 3,700 worldwide.

At Harvard, copyright is not an obstacle to open access. At eight Schools, faculty members have granted the University non-exclusive rights to make their future scholarly articles accessible. (Harvard was the first university to design its open-access policies to solve copyright problems.) At Harvard Schools with such policies, Suber said, “Every faculty member can deposit in DASH without having to ask anyone else.”

He compared conventional publishing, with its limited circulation and pay walls, to a tollbooth.